The start of a new year is seen by many as a time for new beginnings, and that definitely appears to be the case with Burger King, who have kicked off 2021 by unveiling their first rebrand in over 20 years. 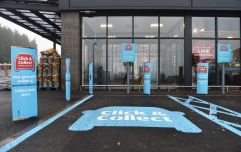 END_OF_DOCUMENT_TOKEN_TO_BE_REPLACED

The fast food chain have gone all out, introducing new logos, merchandise and menu boards. For now, they will only be seen in the US before gradually being rolled out in its restaurants around the world.

Burger King recently announced that its flagship burger, the Whopper, is free of artificial colours, flavours and preservatives, and the new changes are said to signal the company's commitment to food quality.

"The launch of this entirely new visual identify represents who we are," said Burger King President, Chris Finazzo. "It captures the brand, especially in the moment we’re in now and, more importantly, it’s a symbol of what we want this to stand for. Things are changing at Burger King. It's an exciting time and we want to symbolise to the guest that they will be able to get a better experience."

As well as the main logo - seen in the tweet below - the chain have also introduced another simpler design, which comprises of just the B and K while simultaneously looking like a burger.

out with the old, in with a new classic #NewProfilePic pic.twitter.com/y2eRT9qqO6

The logo has gone down particularly well with many of those who have seen it, with several paying tribute to the simplicity of the clever design on social media.

The new Burger King logo is a B and a K and a burger AT THE SAME TIME pic.twitter.com/2CtdQ1BJWm

Whoever designed the new Burger King logo should be allowed to design EVERYONE'S logo.

These were the other options Stephen Kelleher Studio had for the new Burger King monogram.

I still can't get over how crazy good the Burger King rebrand is (especially this monogram icon). A 'B' including the buns, and a 'K' between the buns, whilst looks so incredibly simple at the same time. pic.twitter.com/stG56oVtn3