Some poor woman was simply trying to work out when she realised that a man was recording her in the gym.

END_OF_DOCUMENT_TOKEN_TO_BE_REPLACED

TikTok user @marziii10 was filming her workout while lifting dumbbells in front of a mirror at the gym - but it turns out she wasn't the only one watching.

As you can see in the clip below, a man walks behind her with the camera on his phone clearly open and tries to get a sneaky picture of her behind.

END_OF_DOCUMENT_TOKEN_TO_BE_REPLACED

As mentioned in the caption of the video, it wasn't until after she watched the footage back in the car having left the gym that she spotted the stranger's very obvious attempt to take a quick snap without her consent. As it turns out, the guy was actually taking a video, not a photo.

The top line of the video itself was simply accompanied by the line "I'm disgusted" - and quite honestly, we are too.

While the majority of the comments slammed the unidentified creep and urged the TikToker to report him to staff, a selection of people had the audacity to try and defend him, suggesting that it was entirely clear that he was filming her from the footage. 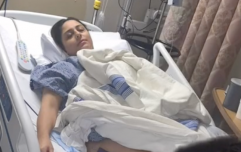 END_OF_DOCUMENT_TOKEN_TO_BE_REPLACED

Nevertheless, those that weren't in denial and willing to accept that some blokes act incorrectly asked to view another angle, as the text on the initial video obscured his face. While not super clear, this follow-up does catch a glimpse of the stranger side-on which viewers hope to use to help identify him. The internet always finds a way.

@marziii10Reply to @donovan.83 ok so he’s definitely bald and maybe has a beard?? I zoomed in and slowed it down♬ original sound - m

For anyone that somehow needs reminding, you can't take pictures of people without their consent - especially not a video in a gym ie a private facility that is supposed to be a safe space for people to exercise.

Earlier this year, we spoke to a female PT about the seriously dodgy messages she receives from male clients. Honestly, what is wrong with people?

popular
Liverpool crowned Premier League champions, but only on aggregate
Ukrainian refugee who ran off with dad finally speaks out and blames man's partner for split
Topless mum in her undies rescues pet goose from bald eagle in crazy video
This 'Welcome to Luton' prank sends Gatwick Airport arrivals into a frenzy
Noel Gallagher left 'covered in blood' after headbutt from Ruben Dias’ dad
Volcano where mutant sharks live in acidic underworld crater is erupting
Shocking moment lion rips off man's finger after he sticks his hand into zoo cage
You may also like
Life
Man gets 2kg dumbbell stuck in his bum - doctors forced to pull 20cm weight out by hand
News
Woman calls out 'ego lifter' man at gym - gets absolutely schooled
Music
Fans lose it as video finally reveals how 50 Cent got upside for Superbowl performance
Life
Woman nearly died after spin class left her with a life-threatening condition
Sport
Dan Bilzerian says it's 'not healthy' to be as big as The Rock
Next Page