No more waiting for it to come on ITV2 again

One of the most beloved British comedies of this generation, Shaun of the Dead, has just been added to Netflix. 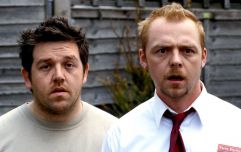 END_OF_DOCUMENT_TOKEN_TO_BE_REPLACED

We probably don't have to explain what Shaun of the Dead is. But it is worth taking a moment to remember just how great it is.

The movie spun out the iconic Channel 4 sitcom Spaced - and in particular, a scene where Simon Pegg's character Tim stayed up all night playing Resident Evil and starts to hallucinate zombies.

Pegg and director Edgar Wright discovered that they had a shared love of George Romero movies, and had so much fun making that little scene, that they set to work writing a full zombie movie.

What makes the film work so well is that it genuinely works as a horror movie, as well as a comedy. Sure, we remember all the jokes about Cornettos and "You've got red on you" - but when characters start getting killed, you really feel it. It is genuinely horrific. And the film doesn't skimp on the gore, either, being as violent as any of the Romero movies that inspired it.

On a recent appearance on Eli Roth's History of Horror podcast, Edgar Wright even said the movie was partially an apology to several of his and Simon Pegg's ex-girlfriends.

Of course, the team of Wright, Pegg and Nick Frost would go on to complete their 'Cornetto Trilogy' with Hot Fuzz and The World's End - but for many, nothing has topped Shaun of the Dead.

popular
Bartender sends boss brutal three-word response after 3am text
NHS doctor facing deportation because 'she can't speak English'
Woman starts driving over Insulate Britain protestor in furious standoff
18 months on, Liverpool vs Atletico Madrid from the fans who were at Anfield that night
Outcry after woman sentenced to four years for miscarriage of 17-week-old foetus
News host was having absolutely none of Nigel Farage's claims on Monday night
Newcastle sponsorship deals to be blocked after Premier League clubs hold emergency meeting vote
You may also like
Entertainment
WATCH: The first trailer for Simon Pegg & Nick Frost's new horror-comedy
Entertainment
Simon Pegg shared his idea for a Hot Fuzz sequel, and it sounds great
Entertainment
Simon Pegg opens up about battle with alcoholism and depression during filming of Mission: Impossible
Entertainment
How well do you really know the Three Flavours Cornetto trilogy?
Entertainment
Watch Tom Cruise and Simon Pegg do these epic driving stunts for new Mission Impossible film (Exclusive Video)
Next Page