Some horror movies get you with jump scares and excessive gore

It Comes At Night, which has just been added to Netflix, is not one of those.

The 2017 acclaimed indie horror hit has a simple premise. After an unspecified contagious outbreak, a family have secluded themselves in their home deep in the woods. The film starts them having to dispose of a deceased family member who has succumbed to the disease, underlining the bleakness of the situation.

The next night, the family catch an intruder trying to enter their home. He explains that he is only trying to find supplies for his family as well. Do they let him in? Can they trust this other family? Are they stronger together, or are they sealing their own doom by opening their home to them? 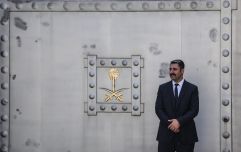 The Dissident: the documentary banned in Saudi Arabia and refused by Netflix

END_OF_DOCUMENT_TOKEN_TO_BE_REPLACED

It is a film about paranoia and slow-burn tension. Some viewers did find the film disappointing, expecting something more fast-paced and conventional based on the trailer - but if you go in knowing what to expect, it is a chilling horror that will stick with you long after the credits roll.

popular
Rio Ferdinand recalls Roy Keane sparking out United youngster in training
The best La Liga goals of the weekend
PlayStation and Xbox users will now be able to play against each other online
Student sent home from school because her outfit "made teacher feel uncomfortable"
A definitive ranking of every swear word from worst to best
Here's how to see who's been taking screenshots of your Instagram Stories
Only half of young people say they are exclusively attracted to the opposite sex
You may also like
Television
Taylor Swift hits out at Netflix comedy show for "lazy, deeply sexist joke" about her
Entertainment
After Life season three to start filming soon, Ricky Gervais confirms
Sport
Netflix announce The Divine Ponytail, a Roberto Baggio biopic
Entertainment
Wednesday Addams is getting her own Netflix series
Entertainment
The Trial of the Chicago 7 is free to watch on YouTube for 48 hours
Next Page