A whole host of returning favourites, including Bryan Cranston and Aaron Paul, are ready to feature in the upcoming feature-length Breaking Bad movie.

Creator Vince Gilligan is said to be behind the project, which Walter White actor Cranston has previously outlined as the key to him featuring in any fresh work around the hit AMC drama.

Film website Revenge Of The Fans has the down low on the title, currently given the codename Greenbrier, stating that other characters set to appear include Jonathan Banks (Mike), Jesse Plemons (Todd), Charles Baker (Skinny Pete), Matt Jones (Badger), Robert Forster (Ed, aka The Disappearer), Tess Harper (Mrs. Pinkman), and Kevin Rankin (Kenny).

In addition, Krysten Ritter, who plays Jane Margolis, is due to appear which (spoiler alert) is a surprise as the girlfriend of Paul's character Jesse Pinkman died in the first series.

In the same vein, Cranston's presence in the two-hour film raises questions as to how the plot will unfold given that it is set to take place in the immediate aftermath of White's death and Jesse's escape in the final ever episode. 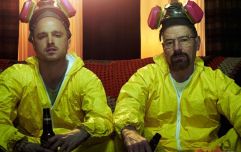 A Breaking Bad film is coming

END_OF_DOCUMENT_TOKEN_TO_BE_REPLACED

Characters from prequel spinoff Better Call Saul are also due to appear, raising hopes that the movie will tie up the remaining plotlines and character arcs of those who haven't yet been afforded that privilege.

"If Vince Gilligan asked me to do it, sure, absolutely," Cranston said on reprising his role in the title on The Dan Patrick Show last November. "He’s a genius.

"This idea, from what I was told, gets into at least a couple of the characters who were not completed as far as their journey. I can’t wait to see all those people again… even if I just come by to visit."


popular
QUIZ: Can you identify these cities highlighted on a map?
A definitive ranking of every swear word from worst to best
Donald Trump paid $3 million for recount that uncovered more Biden votes
James Milner says he is "falling out of love" with football because of VAR
Jurgen Klopp argues with BT Sport interviewer over kick off times
Unfortunate wardrobe malfunction brings another UFC fight to a halt
'Time traveller from 2030' passes lie detector test over future predictions