Alison Hammond had This Morning co-host Dermot O'Leary in stitches after watching her "juice moving around" in a racing car.

The presenter, 47, was in the passenger seat next to Australian F1 driver Daniel Ricciardo at Silverstone when her wardrobe malfunction took place.

Ricciardo sped around the track at super fast speed - leaving Hammond screaming and holding onto the window for dear life.

Though, as the video revealed, she probably should've been holding onto something else.

"Did you see all the juice moving around?" 🍉

O'Leary was left in bits when the clip was played on This Morning on Friday. 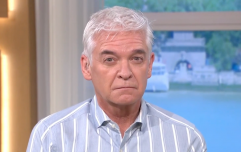 END_OF_DOCUMENT_TOKEN_TO_BE_REPLACED

Hammond was equally amused, asking: "Did you see all the juice moving around?"

The producers then proceeded to play her racing-car wardrobe malfunction again for viewers - this time in slow motion.

Dermot was naturally left speechless after watching this - all he could do was put his head on the table in an attempt to control his laughter.

popular
Stranger Thing's star Noah Schnapp slides into Love Island's Ekin-Su's DMs
Tens of thousands rush to sign-up to 'Enough is Enough' campaign - crashing their website
Mum learns paedophile neighbour took over 50 pictures and videos of her as she sunbathed
Tourists left 'squealing' as thousands of venomous crabs invade UK beach
Jack Grealish rubbishes now deleted tweet claiming he clashed with Guardiola during West Ham game
Ryan Giggs 'deliberately headbutted ex-girlfriend' court told
The FootballJOE Pub Quiz: Week 49
You may also like
News
This Morning viewers slam 'dangerous' heatwave advice given out by guest
News
This Morning's Holly and Phil left speechless listening to couple's sex session live on telly
Life
Woman conned out of £500,000 by scammer posing as Gerard Butler on Facebook
News
This Morning live show pulled from ITV after 'suspicious item' found
Entertainment
'No one should ever be cold' - Alison Hammond demands free heating for most in need
Next Page