COMMENT: This sick and dangerous era of Boris-pandering needs to end

It's all a fucking game for Boris.

Conservative party politics got us into this mess and now it is serving to push us further towards the abyss. The EU Referendum was quite clearly motivated by a need to placate Eurosceptic backbenchers, and backfired spectacularly when the most irrational, unthinkable, and harmful outcome transpired. Reckless arse-coverer David Cameron hurriedly fucked off to France to put his trotters up like the cowardly pan-faced swine he is, whilst various opportunistic Tory twatbags jostled to fill the vacuum. Of course Boris fucking Johnson was in the mix, and of course he fucked it up through a combination of hubris and incompetence.

END_OF_DOCUMENT_TOKEN_TO_BE_REPLACED

The grotesque presence of the Eton mess has haunted every aspect of this sorry chapter in our political history. Pork puller Cameron feared Johnson as a potential threat to his leadership, which part-motivated his pathetic concessions to a lunatic fringe of his party. Thus began a dangerous era of Boris-pandering.

A poisonous referendum was characterised by xenophobia, wicked lies, and numerous broken rules.

At the centre of the shitstorm was Johnson, who stood beside racist bigots, in front of giant falsehoods, but never by his own principles. He knew full well the perils of Brexit, but ignored them for personal gain.

This dereliction of duty and monstrous duplicity has been rewarded with accolades, appeasements, and high office, as the likes of Cameron and Theresa May kept him uncomfortably close out of self-preservation.

END_OF_DOCUMENT_TOKEN_TO_BE_REPLACED

It didn't work of course, as Boris gradually gained a critical mass of Hard Brexit bastards to do his bidding for him and push his agenda.

And now the immoral oaf is mounting his big push to usurp our badly-choreographed PM.

Pathetic feckless Theresa may dance like no one's watching, but she has always known that Johnson has his beady eyes on her job. On Monday morning, a big telegraphed offensive was given the front page treatment. 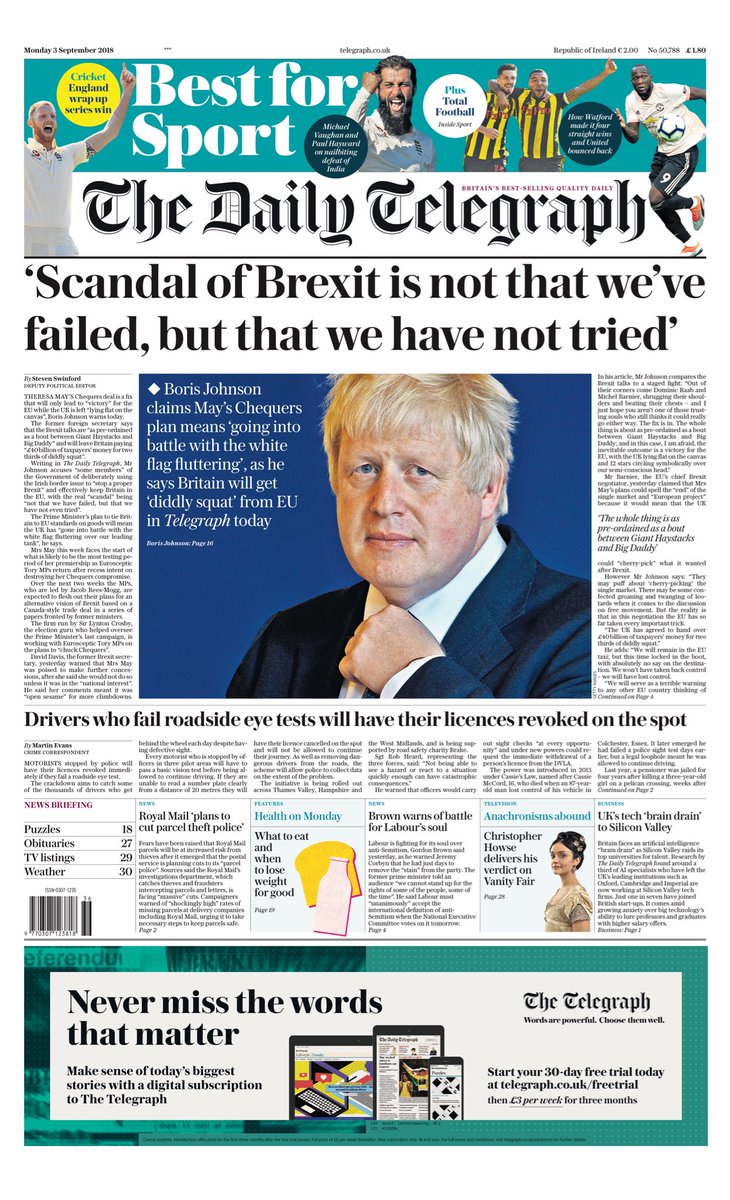 END_OF_DOCUMENT_TOKEN_TO_BE_REPLACED

In providing no kind of real plan or alternative of his own, Johnson is doing what he has always done - covering up intellectual nothingness with bombast.

So we are subjected to military metaphors of 'fluttering' white flags and 'tanks' going into 'battle', without the merest hint of strategy or sense. It would be laughable if it wasn't so effective with the sexually-repressed boarding school twats that Boris counts as allies.

And of course the right-wing rags will photoshop it up for the proles.

Theresa May is as opportunistic and lacking in moral fibre as the rest of them, but she is trying (hopelessly and badly) to find workable solutions to an inevitable disaster.

Johnson doesn't give a shiny shit about anything but himself, and so can vacuously rally from the sidelines for a Brexit doesn't exist beyond meaningless soundbites.

The sad thing is, his loud cacophony of nothing much will probably work. He is a nasty piece of work who will stop at nothing - from racist rabble-rousing to promising the moon on a stick to the desperately poor - to get what he wants.

It's all a game for him, and we should stop pandering to his dangerous bullshit before it's too late.

popular
Runner finishes last in 400m race as penis keeps falling out of shorts
Massive piece of Elon Musk's spacecraft lands on farmer's property and could make him very rich
Inbetweeners star Joe Thomas has been in a relationship with his co-star for over 10 years
Teacher's sex abuse sentence delayed after she gives birth
Tourists left 'squealing' as thousands of venomous crabs invade UK beach
NASA scientist's desperate plea before being arrested
Woman almost died during sex when orgasm popped aorta
You may also like
Politics
Can you guess the real names of these UK politicians?
News
Why Nancy Pelosi's Taiwan visit is so important but could have dire 'consequences'
Politics
Jacob Rees-Mogg says he was 'wrong in the right way' about post-Brexit queues at Dover
Politics
British shoppers pay up to 50 per cent more than those in EU 'thanks to Brexit'
News
Labour frontbencher Lisa Nandy joins picket line in Wigan
Next Page