No, Brexit did not speed up the UK's coronavirus vaccine approval

Matt Hancock made inaccurate claims about authorising a coronavirus vaccine

The UK is the first country in the world to approve the Pfizer coronavirus vaccine.

During Wednesday morning's broadcast round interviews, you may have heard Matt Hancock say something like this:

“Because we’ve left the EU we’ve been able to move faster.”

Health Secretary Matt Hancock credits Brexit as Britain becomes the first country in the world to approve a coronavirus vaccine.

Earlier on, the health secretary had told Times Radio: "We do all the same safety checks and the same processes, but we have been able to speed up how they’re done because of Brexit."

But just hours later the actual vaccine regulator, Dr June Raine, contradicted Hancock during a government press conference when she was asked if leaving the EU had sped up approval.

Dr Raine said: "We have been able to authorise the supply of the vaccine using provisions under European law which exist until 1 January." 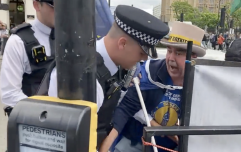 END_OF_DOCUMENT_TOKEN_TO_BE_REPLACED

When the UK left the EU earlier this year a "transition period" began that carried over EU regulation until the end of 2020.

As part of EU membership, the approval of vaccines is centralised and under European control via the European Medicines Agency.

However, in time of health emergency individual countries are permitted to diverge from that regulation, as the BBC's Ros Atkins later reported.

The UK Health Secretary Matt Hancock says the UK was able to speed up the process of approving the Pfizer vaccine because of Brexit. ⁦@BBCRealityCheck⁩ says that the UK was first ‘has got nothing directly to do with Brexit’. This video has more. https://t.co/lCsw6rITOz pic.twitter.com/dSsA3PaXUa

Jens Spahn, the german health minister, said yesterday: "We have member states including, Germany, who could have issued such an emergency authorisation if we’d wanted to. But we decided against this and what we opted for was a common European approach to move forward together."

In other words, even if the UK remained a member state of the European Union we still would have had the option to diverge and go it alone.

So when asked by LBC's Nick Ferrari if Brexit had aided the process this mornng, education secretary Gavin Williamson wouldn't make a causal link, simply stating that the UK had achieved a world-first before the US, France or Germany because the UK "is a much better country."

The quote - that we have the vaccine because we’re a “much better country” than France, Belgium and America - is hilarious.

But what Mr Williamson doesn’t do, when given the chance, is repeat Matt Hancock’s claim that we delivered the vaccine faster because of Brexit. pic.twitter.com/mPyL2imIRz