Conor McGregor is undoubtedly the biggest name in the UFC firmament.

Dana White may have held an admirable torch for Ronda Rousey during her time out of the fight game but McGregor has long passed her out. Every event that he headlines, records get smashed.

McGregor is now being courted by champion boxers, WWE owners and movie producers. He'll also be drafted in for some help when partner Dee Devlin gives birth to the couple's first child next year.

UFC 205, which featured McGregor's stunning stoppage of Eddie Alvarez to win the lightweight strap, had more than four billion Twitter impressions last week. The numbers are crazy and they keep climbing.

McGregor is now demanding more from his employers at the UFC. He wants shares in the company. If Conan O'Brien and Ben Affleck have equity, he argues, why not the promotion's chief earner?

He can point to the numbers, the belts, the followers and the media coverage but the actions of three sporting stars in recent days have truly proved The Notorious is a global icon.

In international training with France, Pogba warmed up with something McGregor calls 'The Billy Walk' [Billy being short for billionaire].

An ode in itself to WWE mogul Vince McMahon, McGregor cracked it out again as he entered the Octagon to face Alvarez.

17 seconds left on the clock, last night, and Marc Gasol stepped up to drain a three-pointer to clinch a tight game against the L.A Clippers. You'd have to strut, wouldn't you?

Gasol was asked about the walk by reporters after the game and declared, "I want to apologise... to absolutely nobody!" He then doubled down:

Wonder where he got that from?

Mcgregor really to cold. Viscous and lethal. Much luv and respect king

The New York Giants wide receiver was at UFC 205 and was simply in awe of McGregor.

He was granted access to McGregor's post-fight changing room and posed for a picture with 'the champ champ'. He went out the next night and inspired his team to success with a superb touchdown catch. Post-game, he told ESPN:

"I set the bar high for myself. I kind of had some late inspiration.

"I went to the UFC fight and I went there to watch McGregor and just a guy who is very strong in his beliefs and sure enough, he backs it up every time. Just sitting there watching him do his thing gave me more motivation." 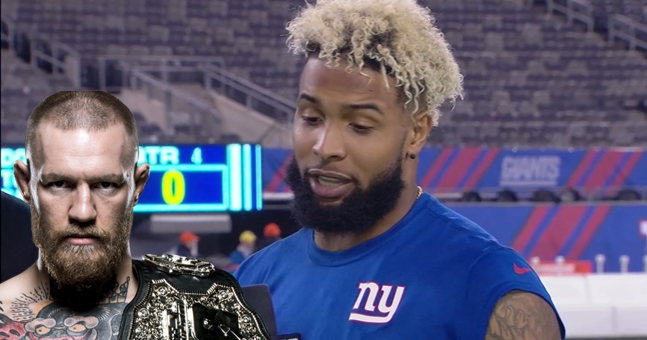 Each one of them paying homage to Ireland's own UFC star. The rise has been incredible but it is not over yet.