Relationships are confusing enough, let alone when your twin sister is also dating your man!

Since appearing on the US reality show, extreme sisters, twins Anna and Lucy DeCinque, have both become engaged to 37-year-old electrician Ben Byrnes. 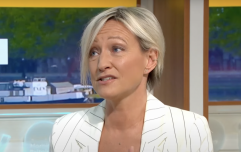 END_OF_DOCUMENT_TOKEN_TO_BE_REPLACED

The show aims to explore “the most obsessive and inseparable sibling relationships”.

The twins have dated the lucky man for seven years and have said they want to be referred to as a single person. As well as sharing a bed, the women also count the same steps, eat the same things, and dress in the same clothes.

Byrnes popped the question to both the ladies during a picnic date, gifting them a set of three rings that represented their throuple.

As residents of Perth, Australia, the trio are not able to be legally married in their home country. However, it is legal in many parts of South Africa, Malaysia, Morroco, and South America. A destination wedding it is!

But the twins are hoping to get pregnant simultaneously using IVF, something they have reportedly wanted to do for a long time.

Anna said if she became pregnant, then her sister “would definitely get pregnant straight away because our bodies need to be the same.”

popular
East London nightclub deaths: At least 22 people found dead in South African 'tavern'
Genius lettuce hack 'puts people to sleep in seconds' - and people swear by it
'Dinosaur lady' wins internet with baffling Question Time remark on rail strikes
The JOE Friday Pub Quiz: Week 300 - the Triple Century
Glastonbury: Watch the incredible moment Olivia Rodrigo and Lily Allen dedicate 'F*** You' to US Supreme Court
Roy Keane booed as he appears on big screen in front of 50,000 fans
Derby County to exit administration after bid for club is accepted
You may also like
Life
Couple who think they might be siblings suggest they will continue to date
Life
Elon Musk's child petitions to change name and sever all ties from him
Life
Scientists reckon sex can reduce the effects of hay fever
Entertainment
Johnny Depp and Kate Moss 'reunited' at second performance in London with Jeff Beck
Life
Man 'caught cheating in Ibiza' humiliated by girlfriend who gets dramatic poolside revenge
Next Page