One arrest has been made, while police investigate a separate incident 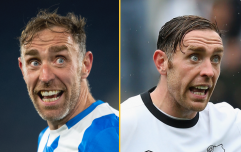 END_OF_DOCUMENT_TOKEN_TO_BE_REPLACED

Brentford have confirmed a season ticket holder has been arrested after their 3-3 draw with Derby County, where Frank Lampard said that midfielder Duane Holmes had been abused shortly after being substituted.

As well as this, Wigan Athletic have reported an abusive message sent to Nathan Byrne on Twitter following their 2-2 draw away at Bristol City.

Lampard revealed Holmes had been abused by a supporter after he was substituted in the match at Griffin Park.

"Duane Holmes complained that he was racially abused - I didn't see it, I was facing play and a fan came up to him at the side of the dugout and abused him," the former Chelsea midfielder told Sky Sports.

"Because it's such an important issue I don't want to go beyond what I know, but it was very clearly reported by the players and the people around."

Brentford confirmed later that the supporter was promptly identified, removed from the stadium and arrested. The club added they are continuing to liaise with police and vowed that "the most severe sanctions will be imposed on any individual convicted of discrimination".

Wigan's Byrne posted an image of an abusive direct message sent to him on Twitter. Wigan have reported the abuse and promised to work with relevant authorities to 'ensure the actions of the person responsible are dealt with appropriately'. 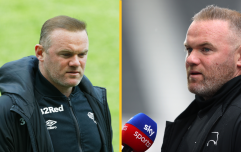 END_OF_DOCUMENT_TOKEN_TO_BE_REPLACED

These incidents come just days after Tottenham defender Danny Rose, who was racially abused while playing for England in Montenegro last month, said he "can't wait" to end his paying career over his frustration the lack of action taken against racism within the game.

popular
Uefa to investigate Manuel Neuer over rainbow armband
A definitive ranking of every swear word from worst to best
The JOE Friday Pub Quiz: Week 248
QUIZ: Can you name these countries on a map?
England and Scotland fans flimed fighting after "we hate Scotland" chants
Norway decides against boycott of Qatar 2022 World Cup
Here's how to see who's been taking screenshots of your Instagram Stories
You may also like
Sport
Wycombe ponder legal action that could relegate Derby County
Sport
Jordon Ibe reveals he is struggling with depression in heartfelt Instagram post
Sport
Derby to appeal decision ordering them to pay Richard Keogh £2m in compensation
Sport
Wayne Rooney retires to become permanent manager of Derby County
Sport
Chorley groundsman slept under heated tent on pitch to ensure Derby game could go ahead
Next Page