This one isn't going away

Not for the first time in recent weeks, Qatar Sport Investment, owners of Paris Saint-Germain, are reportedly in talks with Leeds United owner Andrea Radrizzani about a possible sale of the Championship club.

French outlet L'Equipe claim Nasser al-Khelaïfi, the head of QSI and PSG's president, is scheduled to hold talks with Radrizzani in Doha on Monday, continuing discussions which have been taking place over the last few months.

This report follows claims made by the Financial Times last month, which suggested QSI were holding talks to buy a stake in the club. If agreed, such a deal would allow the natural gas-rich Gulf state to enter English football for the first time.


Qatar is the world’s richest nation in per capita terms and, like other Gulf nations, has been increasingly using investment in sports teams - particularly football - to enhance its image and reputation overseas. 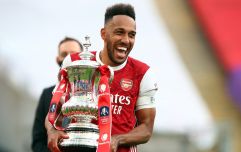 END_OF_DOCUMENT_TOKEN_TO_BE_REPLACED

Leeds were relegated from the top flight of English football in 2004. Despite looking well placed to secure a return for most of the Championship season, they were beaten by Derby County in the play-off semi-finals. This, it has been claimed, saw negotiations with Qatar reopened.

Though speculation has claimed QSI are also plotting a takeover of Serie A side, AS Roma, L'Equipe suggests investment in Leeds is of more interest to them.

Despite the continued speculation, Leeds have so far denied any claims that any sale is in the offing.