'The Eagle' is a Real Madrid fan, but he likes Liverpool's style

Khabib Nurmagomedov was in London this week to help promote UFC 242, which takes place in Abu Dhabi this September.

END_OF_DOCUMENT_TOKEN_TO_BE_REPLACED

Nurmagomedov will put his 155lbs belt on the line and face off against interim lightweight champion Dustin Poirier at the pay-per-view event. He was suspended for six months for instigating a brawl at UFC 229, moments after submitting Conor McGregor with a hefty neck crank.

The 30-year-old could have returned in April but he opted to wait until all of his teammates' suspensions had elapsed. He has also demanded to have Dagestanis such as Islam Makhachev and Muslim Salikhov on the fight card.

The UFC 242 press conference was several notches less interesting than even the quietest day during the build-up to Nurmagomedov vs. McGregor. Both Poirier and Nurmagomedov back themselves to become undisputed champion but were respectful of each other.

After the main press conference, Nurmagomedov gave a much more engaging interview to Nick Peet of BT Sport. During their 20-minute chat, the lightweight champ impressed with his football knowledge.

END_OF_DOCUMENT_TOKEN_TO_BE_REPLACED

"I think I am not only a fan, I think I know [football] history," he declared. "English Premier League, for me, is the best league in the world. I follow everything." 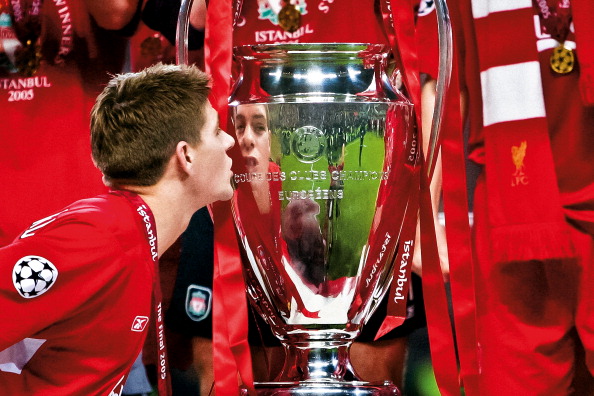 "I remember when I was a kid in 2005 when I watched Liverpool versus Milan, in Dagestan. We had a big screen TV on the beach, thousands of people [were] watching this match.

"It was Milan Baros, [Vladimir] Smicer, [John Arne] Riise, [Sami] Hyypia. I remember this. Stevie Gerrard! It was a very good team, but right now they have a very good team too. I watch all the Champions League matches and Liverpool. But I'm a big fan of Real Madrid."

"But I like English Premier League, even if the worst teams are playing, they have the best games."

Nurmagomedov also stated, during his interview, that he would never fight in Las Vegas again. Check out the full interview here:

The Dagestani has claimed he will cement his lightweight legacy by defeating Dustin Poirier and then Tony Ferguson to defend the 155lbs belt four times (beating the current record of three) and then seek a legacy-defining fight.

We reckon the only fight that may tempt him back to Las Vegas would be Georges St-Pierre in a catch-weight humdinger.