John Terry will reportedly earn £3m at his new club

Terry, who spent last season playing in the Championship with Aston Villa, is believed to be close to completing a switch to Spartak Moscow after reportedly undergoing a medical on Saturday and agreeing personal terms with Russian Premier League side. 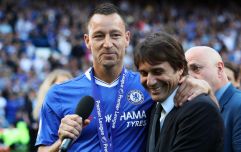 Antonio Conte pulls up John Terry for eating too many biscuits

END_OF_DOCUMENT_TOKEN_TO_BE_REPLACED

According to The Mirror, the Chelsea legend will sign a one-year deal with Spartak which will earn him £3m.

The 37-year-old left Villa following their Play-off final defeat to Fulham at the end of last season having previously appeared to talk up the chances of him staying at Villa Park if they were promoted back to the Premier League.

Despite being linked with a reunion with former Chelsea teammate Frank Lampard at Derby County, Terry now looks set for Russia.

The former England captain is currently using Chelsea's training facilities, presumably to help with his fitness ahead of the move being confirmed.

If Terry does join Spartak, he will face former England teammate Steven Gerrard in this season's Europa League. Gerrard's Rangers team will be in the same group as the Russian club for the group stages of this competition, meaning Terry could be back on British soil for the game between the two clubs at Ibrox on October 25.

Chelsea are also in the Europa League this season, meaning it's possible Terry may face the club at which he spent almost two decades in the knock-out stages.

popular
Man with world’s biggest penis says Oscar winner slid into his DMs
'Super recogniser' draws 'accurate' modern Maddie McCann to help police find her
Bride faints on groom, vomits and gets pooed on during ceremony
Mum in jail for murder pays tribute to son, 6, killed by his dad and new girlfriend
Chilling video shows moment step mum tried to get away with murdering boy, 6
'I did three grams of coke during a game': Inside football's problem with Class A drugs
Bellingham and Haaland criticise refereeing performance after Bayern Munich defeat
You may also like
Sport
John Terry comes out in defence of Harry Maguire after controversial celebration
Sport
John Terry claims Declan Rice is the best midfielder in the world
Sport
John Terry joins Twitter, immediately insults stranger's wife
Sport
Anton Ferdinand denies John Terry's claim he reached out to him
News
John Terry claims "I'm no racist" in bombshell new interview
Next Page