18-year-old Mohamed Elsayed is a rising star in the fencing world. Having done incredibly well at the African Games and the Youth Olympics back in 2018, Elsayed set his sights on the biggest world stage. Upon defeating 3-time World Champion, Yannick Borel, Elsayed solidified his moment in Olympic history. But, caught in the excitement of his success, Elsayed celebrated in arguably one of the most iconic ways, penned by Cristiano Ronaldo himself.

The influence is just unreal. 🐐#OlympicGamespic.twitter.com/7El4gyrgR6 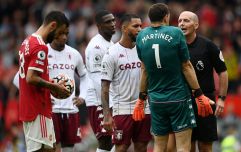 END_OF_DOCUMENT_TOKEN_TO_BE_REPLACED

After an intense final few moments, Elsayed gets the final blow, and with it, the victory. He immediately runs to the perimeter of the ring, leaping, spinning, and screaming into what would usually be the crowd.

Elsayed went on to defeat China's Lan Minghao 15-9 but was unfortunately beaten by Ukrainian powerhouse Ihor Reizlin 15-13. Though the teenager only made it to the quarter-finals, perhaps Ronaldo's winning spirit will enthuse him for future competitions.

This reference to Cristiano Ronaldo's signature 'SIUUU', which essentially means yes, has become a staple in football culture.

"I started to say 'Si', which is like 'yes' when I was at Real Madrid," said Ronaldo to DAZN Italia.

"When we win, everyone says 'SIUUU' and I started to say it, I don't know why. It was natural

"I always say, the best things come in a natural way."

Ronaldo also spoke to Soccer.com about the origins of his signature celebration.

"We were playing a game against Chelsea in the United States, and it just came to my mind.

"I just scored and I yelled 'si' (yes). It was truly a natural thing.

"I started doing that from that day on, and fans seem to like it," Cristiano told the aforementioned website.

"Later on, people on the street stopped me to yell at me 'Cristiano, siiiuuu', they bonded with me through the celebration and I decided to keep it up."