Billy Joe Saunders' trainer Mark Tibbs has revealed exactly what was said in the corner prior to his decision to pull the Englishman out of last night's fight against Canelo Alvarez.

Saunders more than held his own in the clash up until the eighth round, when a blistering right hand from Canelo caused the Hatfield man to suffer a suspected fractured orbital bone.

Canelo's supreme power and evasiveness caused Saunders problems in the opening few rounds, but the 31-year-old fought back and started to find his rhythm in the fourth.

He arguably took that round but most certainly won the fifth as he started to drop his hands and even taunt the four-weight world champion.

Pundits such as DAZN's Chris Mannix even had the Englishman ahead on the scorecards as he started to use every inch of that 22-foot ring that caused so much drama in the build-up.

Canelo was seemingly struggling to land that right hand detonator, but eventually found the sweet spot with aplomb. 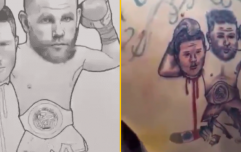 END_OF_DOCUMENT_TOKEN_TO_BE_REPLACED

Attempting to roll Canelo's left hook, Saunders instead left himself exposed to an absolutely destructive right-hand uppercut from the red-haired power puncher, and his right eye instantly blackened.

Eddie Hearn said Saunders is now set for a lengthy spell on the sidelines.

Hearn said: "He's gone to hospital and I believe he'll have that operated on immediately. So he's going to be out for a long, long time."

After the fight, Tibbs revealed exactly what was said in the corner prior to the stoppage and why he decided to pull Saunders out of the fight.

In an interview with Behind The Gloves, Tibbs said:

When the round ended, Saunders struggled to open his eye and appeared to be seen in the corner mouthing "no" to his trainers.