There will be a minute's silence held in memory of Jose Antonio Reyes before Saturday night's Champions League final in Madrid.

Arsenal can win the Premier League in next two years, Bacary Sagna claims

END_OF_DOCUMENT_TOKEN_TO_BE_REPLACED

A statement posted by Sevilla, where he made his first appearance as a 16-year-old, confirmed that Reyes had died following a traffic accident in Utreta on Saturday. He was just 35 years of age.

Reyes, who played for Arsenal between January 2004 and 2007, also spent time with Madrid's two most prominent sides, joining Atletico Madrid in the summer of 2007 and spending the previous campaign on loan at Real. 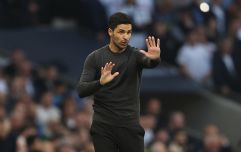 END_OF_DOCUMENT_TOKEN_TO_BE_REPLACED

He left the Spanish capital to return to Sevilla in 2012, spending four years back at the club before spells at Espanyol, Cordoba and Chinese club, Xinjiang Tianshan Leopard FC. He had returned to Spain in January, joining Segunda Division side, Extremadura.

Following the tragic news, Uefa have now confirmed Reyes will be remembered ahead of the game between Liverpool and Tottenham, which will be played in Atletico's Wanda Metropolitano stadium.