Andrew Tate claims to be world's first ever trillionaire

Self-proclaimed Alpha dog Andrew Tate has claimed that he is the world's first trillionaire, telling a woman that she'll "never have to work again." 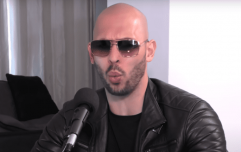 END_OF_DOCUMENT_TOKEN_TO_BE_REPLACED

If you're not familiar with Andrew Tate, then first off, lucky you. The former Big Brother contestant has made a name for himself through his inflammatory misogynistic content that tends to attract like-minded men who also want to be Alphas. Funnily enough, the man who derived the term to describe wolf packs has since said it's rubbish.

In a recent live stream with YouTuber Adin Ross, the 35-year-old Hustlers University creator said: "In general, on average, females are not as good at driving as men."

Tate then brings a woman named Kazumi onto the stream for a virtual "date" that has since been ripped to shreds on TikTok.

END_OF_DOCUMENT_TOKEN_TO_BE_REPLACED

He said: "I'll look after you baby, you'll never have to work again. I don't know if you knew this, I don't want to brag but I'm going to tell you something – I'm a trillionaire… the world's first."

END_OF_DOCUMENT_TOKEN_TO_BE_REPLACED

While he allegedly became a trillionaire "quite recently", Tate told Ross that he made his first million at 27 and his first $100 million by the time he was 31.

While there's no way of confirming his exact net worth, The Sun reports the figure to be much lower at just £16.2million.

Reacting to the statement, one Twitter user wrote: "His little teenage fan boys believe anything."

"I'm the worlds first human velociraptor but dont hear me bragging about it," another said.

popular
Incredible case of the only known individual whose parents were two different species
Multiple fatalities after planes collide mid-air over airport
Andrew Tate banned from Instagram and Facebook
Former Playboy Bunnies detail what it was like having unprotected orgies with Hugh Hefner
Court hears cringeworthy poems Ryan Giggs wrote to his ex
Footage emerges of Andrew Tate getting knocked out during kickboxing bout
The JOE Friday Pub Quiz: Week 308
You may also like
Life
Footage emerges of Andrew Tate getting knocked out during kickboxing bout
Life
Grandfather hits out at influencers after his pastel pink home becomes a photoshoot hotspot
Entertainment
People compare reaction to Tommy Lee's explicit post with the scrutiny Britney Spears is facing
Life
Moment Jake Paul ends up in dramatic fight with YouTuber in club
Sport
Kylian Mbappé slammed for 'shocking attitude' in PSG's win against Montpellier
Next Page