VIDEO: The start of the latest Republican Debate is the most cringeworthy thing you'll see all week

US network ABC hosted a debate between the main players in Republican presidential field last night and it produced TV gold at the very start. 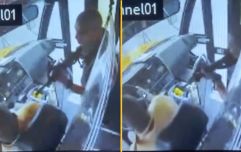 END_OF_DOCUMENT_TOKEN_TO_BE_REPLACED

Unfortunately (and hilariously), a few of the candidates didn't hear their names when called and a bit of a pile-up built at the side of the stage.

In a metaphor for the nomination race in general, various hopefuls cramped each others' style by jostling for the same position, with no one really having a clue...

popular
A New York Times quiz can determine where in the UK you come from
Ant Middleton leaving the UK for Australia because it’s 'too pretentious'
Glasgow protesters successfully halt deportation of neighbours by UK Home Office
The JOE Friday Pub Quiz: Week 242
Prince Harry criticises Charles’ parenting saying 'he passed on pain and suffering’
Madeleine McCann detectives ‘given dramatic new evidence against prime suspect’
$365 billion wiped off crypto market after Tesla stops Bitcoin purchases
You may also like
Social Media
Tiger roaming street in Houston ends in tense stand off
News
Teacher suspended after telling class George Floyd was a "criminal"
News
The mystery of why human feet keep washing ashore in the US has been solved
News
Hundreds of people named Josh have fight in park to crown the 'One True Josh'
News
Caitlin Jenner announces bid to run for California governor
Next Page