'Tier 5' lockdown for England being considered by government

Harsher restrictions than November could be imposed in the New Year, a Tier 5, it's reported

A lockdown stricter than current Tier 4 measures is being considered by the government, it is reported. 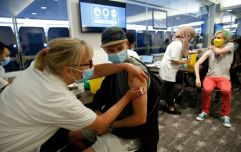 END_OF_DOCUMENT_TOKEN_TO_BE_REPLACED

SAGE last week directly advised Downing Street that secondary schools should not open in January, contrary to current policy, and that a harsher lockdown than that of November should be considered in order to keep the infection R rate below 1.

Government scientists have said that a repeat of November, shutdown but with schools open, would not be sufficient to control the virus, Politico reports.

It's also understood that the coronavirus strain originating from South Africa is now spreading faster than the other variant found in the UK and shutting secondary schools would be more impactful than closing primaries.

Several newspapers are also reporting that little more than a week after the creation of localised Tier 4 measures, Boris Johnson's government is considering harsher national restrictions.

An anonymous source told The Express: "We are ruling nothing out, the new strain is of serious concern. Tier 4 appears to not be strong enough. [We could be] adding another level onto Tier 4, so like a Tier 5."

In Tier 4 all non essential businesses are closed, restaurants and pubs may only provide a takeaway service but schools remain open. There is also a general stay at home order, only permitting people to go outside for limited reasons. Indoor social mixing is banned, as is international and domestic travel.

Tier 5 would go further than this.

"We keep this under review, we are constantly hearing from our scientific advisers about what we should do."

popular
Uefa to investigate Manuel Neuer over rainbow armband
A definitive ranking of every swear word from worst to best
The Chase has responded to viewers convinced the show was rigged to avoid paying jackpot
Here's how to see who's been taking screenshots of your Instagram Stories
QUIZ: Can you name these countries on a map?
Didi Hamann says Ronaldo looks "a fool" after needless showboating against Germany
England and Scotland fans flimed fighting after "we hate Scotland" chants
You may also like
News
Scientist says 'lockdowns are the single biggest mistake in history'
Entertainment
Andrew Lloyd Webber 'prepared to be arrested' if theatres don't fully reopen
News
June 21 unlocking could be delayed by two weeks
News
Vaccines to be offered to 25-29-year-olds from tomorrow
News
Third Covid wave 'likely' in Wales, minister for health says
Next Page