The singer faces decades behind bars

R. Kelly has been found guilty of racketeering and eight violations of an anti-sex trafficking law.

END_OF_DOCUMENT_TOKEN_TO_BE_REPLACED

The jury in the singer's criminal trial in federal court convicted him of the crimes yesterday (September 27), following deliberations that began on Friday afternoon and lasted nine hours.

Mr. Kelly - who was found guilty of playing a leading part in a scheme to recruit women and underage girls for sex crimes that lasted decades - now faces the possibility of decades in prison.

Following years of suggestions and accusations of sexual abuse and other misbehaviour, today's verdict represents the first criminal punishment.

In 2008, Mr. Kelly avoided criminal punishment after he was acquitted on 14 counts in a highly publicised child pornography case.

During the six-week trial, prosecutors provided evidence that dated back to 1991 and described in detail a complex case of abuse.

Nearly four dozen witnesses were called to testify by prosecutors, which included nine women and two men who accused Mr. Kelly of abuse or other misconduct, as well as eight of the singer's former employees.

They testified about how Mr. Kelly concealed a controlling, predator-like nature with a charming public persona. 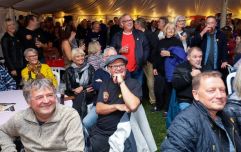 END_OF_DOCUMENT_TOKEN_TO_BE_REPLACED

The trial, which was the first of the Me Too-era, was seen by many as a test of the movement that aims to hold powerful men accountable for sexual misconduct and provide the necessary justice.

Mr.Kelly's lawyers looked to convince the jurors that any sexual activity involving the singer and the people accusing him was consensual, also stating that the accounts of misconduct and abuse were false.

However, despite the defence team's attempt to depict Mr. Kelly as an "altruistic romantic partner" who considered the women around him as family, the seven men and five women on the jury disagreed.

If you are a survivor of sexual assault or any of these details have caused you distress, please visit Rape Crisis, consult the NHS website, call the national helpline on 0808 802 9999, and if you are in immediate danger, please call 999.

popular
Mum who drove into Insulate Britain in rage says 'I just gave them a nudge'
Passengers who allegedly filmed rape of woman on train unlikely to be charged
Lazio suspend falconer after video emerges of him cheering Mussolini
Family of the Newcastle supporter who collapsed issue statement on his condition
Watford staff unhappy with Ben Foster's commitment to vlogging on club time
Everton footballer has bail extended until January
Cold War Steve: How the Banksy of Twitter turned Covid angst into art
You may also like
News
Insulate Britain protestor tied to railing with own banner by angry driver
News
Pub landlords warn of up to 10% pint price increase
News
CCTV images ‘show Amess murder suspect hours before attack’
Entertainment
Mindhunter director tells fans to 'make noise' to get season three made
News
England receive stadium ban from UEFA following Euro 2020 final debacle
Next Page