Fresh from Donald Trump's election victory in 2016, political pundits are once again left picking up the tattered pieces of their projections today after Vladimir Putin stormed to a stunning victory in the Russian presidential election.

The son of a factory worker and Soviet Navy officer, Putin upset the odds both at home and overseas with a victory described as further validation of the democratic process in Russia.

Campaigning on a message of national pride, Putin's hugely popular movement was praised for refusing to use underhand tactics, choosing instead to focus on Russia's accomplishments and avenues for potential expansion.

Putin, after re-election, laughs off question about running for another term https://t.co/52PvpdhBWP pic.twitter.com/8aI3UNuVIg 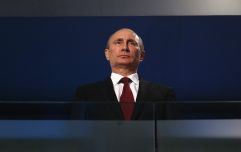 END_OF_DOCUMENT_TOKEN_TO_BE_REPLACED

There was widespread relief among his supporters following confirmation of the victory, with many previously fearing that the under-funded campaign might be outgunned by presidential rivals who enjoy the backing of Russia's elite.

However, Putin's warmth and voter appeal - combined with his ability to delegate UK-based projects to his advisers - eventually saw the plucky upstart take the reins against all odds.

The shock result casts doubt on the smooth running of World Cup 2018, for which Russia is the host nation, in what has otherwise been a well-organised and uncontroversial road to the tournament.

Expecting a continuation of the empathy characteristic of Putin’s campaign, fans are predicting FIFA’s flagship event to be the most inclusive and diverse yet.


popular
The Boys' showrunner says the Marvel films are 'dangerous' to society
QUIZ: Can you identify these capital cities on a map?
FootballJOE’s Badge Quiz – #5
Sunday league player scores ridiculous no-look corner
A definitive ranking of every swear word from worst to best
The accents in The Haunting of Bly Manor are driving people insane
Bruno Fernandes caught by surprise at being named Man Utd captain

You may also like
Politics
Is Dominic Cummings' Russia link a danger to Britain?
News
How to expose the Russian government's lies, by someone who does it on the reg
Entertainment
Russia is remaking Chernobyl with the Americans as the bad guys
News
Heroic flight attendant died evacuating passengers from burning plane
News
At least 41 killed in Russian plane crash
Next Page