In some utterly stunning new images released by NASA, scientists working the Chandra X-ray Observatory - a space telescope sent up into orbit back in 1999 - have compiled decades worth of data to show what the epicentre of the Milky Way looks like.

Obviously, we can't make hide nor hair of it but you've gotta say, it looks darn purdy.

NASA shared the vertical panorama which gathered images and data from more than 370 different observations made by the Chandra and other telescopes on social media.

In the official article, they described the representation of billions of stars and black holes of millions as "Magnetized Threads Weave Spectacular Galactic Tapestry". You can, of course, dig into the science yourself if you're feeling 200 IQ but NASA summarised the impression quite succinctly here:

Unravel the threads of superheated gas and magnetic fields that make up the tapestry of energy of our Milky Way galaxy. 🌌

A new image from @ChandraXray brings to life the giant mosaic of data that weaves together this cosmic masterpiece. Discover more: https://t.co/UJZMMDe2Zg pic.twitter.com/jkNgFXk2z2 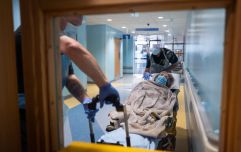 Why Covid kills some people and not others - scientists crack mystery

END_OF_DOCUMENT_TOKEN_TO_BE_REPLACED

Daniel Wang from the University of Massachusetts Amherst was involved in the project while working from home during the coronavirus pandemic.

He explained that: "What we see in the picture is a violent or energetic ecosystem in our galaxy's downtown."

He went on to elaborate that "[t]here are a lot of supernova remnants, black holes, and neutron stars there. Each X-ray dot or feature represents an energetic source, most of which are in the centre." Mind-boggling really.

The de facto city centre of the Milky Way is approximately 26,000 light-years away, meaning it would take roughly 967,200,000 years to get there. Definitely don't want the kids in the back for that journey.

popular
'Super recogniser' draws 'accurate' modern Maddie McCann to help police find her
'I did three grams of coke during a game': Inside football's problem with Class A drugs
The JOE Friday Pub Quiz: Week 272
Cat suffers from rare condition that makes them gain insane muscle mass
Mum in jail for murder pays tribute to son, 6, killed by his dad and new girlfriend
Chilling video shows moment step mum tried to get away with murdering boy, 6
Man suing company after being 'hung upside down like meat' at Christmas party
You may also like
Science
Sperm is being used to create eco-friendly plastic
Entertainment
Wario is officially the best character to use in Mario Kart
News
Saturn is losing its rings, much faster than experts thought
Fitness & Health
Men with larger noses have bigger penises, a study shows
News
Strange radio waves from centre of galaxy are baffling astronomers
Next Page