Biden has served as Vice President for the entire eight years of Obama's administration, and will be stepping down from the role when Donald Trump takes office on January 20. 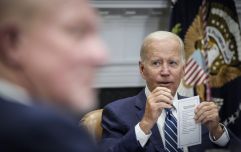 END_OF_DOCUMENT_TOKEN_TO_BE_REPLACED

Obama, who called Biden his "brother" clearly surprised his colleague who could not hold back the tears when he realised what was happening.

This is for your "faith in your fellow Americans, for your love of country and a lifetime of service" the President told him, adding that he has been the "best possible choice, not just for me, but for the American people".

The award is so rare, it has only been given three times by the last three presidents combined, and Biden insisted he had no idea it was coming.

"I had no inkling. I thought we were coming over to Michelle for you, Jill and Barack and I and a couple of senior staff to toast one another and say what an incredible journey it's been," he said.

"Mr President, you got right the part about my leaning on Jill but I've also leaned on you and a lot of people in this room.

"I don't deserve this but I know it came from the President's heart," he added.

VP Joe Biden barely held it together as Obama surprised him with the Presidential Medal of Freedom pic.twitter.com/V0rGgKiINY

popular
Love Island extended tonight for ‘most dramatic and explosive Casa Amor ending' in show history
Dad who left partner for Ukrainian refugee is now her full-time carer after she became partially blind
Chelsea set to hijack Frenkie de Jong deal, offering two players plus cash
British Airways jet catches fire as passengers and crew are evacuated after flight from London
Premier League club faces call to suspend international player over rape allegations
Boris Johnson says he is 'so sad to give up the best job in the world'
‘Bye, bye Boris’ song playing in the background of PM’s resignation speech is the finale we all needed
You may also like
News
Jake Paul says those who voted for Biden are the 'problem' and cites five examples
News
Elon Musk says Biden only won the 2020 US election because people 'wanted less drama'
News
Joe Biden tries to shake hands with thin air after finishing speech
News
Images exposes Joe Biden’s ‘cheat sheet’ notes so he doesn't repeat Putin gaffe
News
Awkward moment Joe Biden accidentally calls Kamala Harris 'the first lady' while still married to Jill
Next Page