An Italian port workers’ union in Livorno, Tuscany, has refused to load a supply of arms and munitions destined for Israel in protests against the country's ongoing airstrikes that continue in the Gaza Strip, with hundreds killed and thousands injured.

END_OF_DOCUMENT_TOKEN_TO_BE_REPLACED

The shipment believed to be bound for Ashdod (a major port in Israel) contained “weapons and explosives that will serve to kill the Palestinian population” and, as a result, L’Unione Sindacale di Base (USB) have stated that they "will not be an accomplice in the massacre of the Palestinian people".

The Italian port workers ascertained information regarding the contents of the cargo by using information from a Genoa-based campaign called Weapon Watch and subsequently refused to carry out their duties.

The shipment was ultimately carried out through Naples according to The New Arab and the violence shows no signs of de-escalating. The USB took part in a street protest calling for “an immediate stop to the bombings on Gaza" as the conflict continues to escalate for a second week. 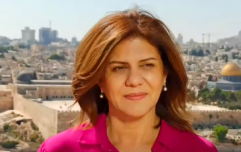 END_OF_DOCUMENT_TOKEN_TO_BE_REPLACED

Tensions had been rising throughout Ramadan but the violence broke out earlier this month. The UN warned that the situation was heading for a "full scale war" days ago. In Israel latest offensive on Gaza and other Palestinian territories, 42 were killed in an airstrike, including 16 women and 10 children.

Over a quarter of all casualties are now said to be children and #FreePalestine protests are taking place all around the world. Ten people are also said to have died in Israel, including a five-year-old boy.

The IDF also launched an airstrike on the Hamas leader, Yehiyeh Sinwar, on Sunday.

Gaza is set to face a blackout as it runs out of fuel; meanwhile, Israeli Prime Minister Benjamin Netanyahu says he will not stop until there is "complete quiet". This is the worst violence the region has seen in nearly a decade.

popular
Bette Midler wants the US to ban Viagra because it’s ‘God’s will’ to have a ‘limp d**k’
Travis Barker’s daughter shares picture of Blink-182 star in hospital bed - tells fans to ‘send your prayers’
British teen says she was raped in Majorca hotel by 'famous actor and musician'
Police hunt for two 'laughing' men who kissed three-year-old girl in front of distressed mum
Father takes his own life after 18-month-old found dead in hot car
'You're disgusting': Prince William roars at photographer who was 'stalking' his family
Halifax has introduced staff pronoun badges and its customers are not happy
You may also like
Entertainment
Emma Watson accused of antisemitism after Palestinian solidarity post
News
Israel reports first case of rare 'flurona' infection
News
Britain to consider fourth vaccination as Israel and Germany roll out second booster
Sport
Scotland fined for 'inappropriate flag' and jeering Israel national anthem
Sport
FIFA President open to World Cup co-hosted by Israel and Palestine
Next Page