Things you absolutely love to see

Two influencers have had their passports seized in Bali after filming a prank at a store in which one of them painted a mask on their face to try and fool shoppers.

END_OF_DOCUMENT_TOKEN_TO_BE_REPLACED

Leia Se was filmed by Josh Paler Lin with a protective mask painted on to her face. The pair walked around the shop attempting to avoid being called out by shoppers.

Se painted her face to make it look like she was wearing a blue disposable mask. Unsurprisingly the video was criticised online for its stupidity.

However the two of them have now received more than online criticism.

The Indonesian government have confirmed that the pair have had their passports seized and that authorities are considering deporting them. Lin has been identified as a Taiwanese national, and Se is Russian.

I Putu Surya Dharma, a spokesperson from the regional office for the Ministry of Law and Human Rights, said that Public Order Agency (Satpol PP) officers would be questioning the influencers.

Per Coconuts Bali, he said: "After that they will be examined together with Immigration to take the decision on whether or not to deport them."

Meanwhile the head of Bali Civil Service Police said that they planned to issue a letter recommending that the two be deported as their actions violated expected behaviour. 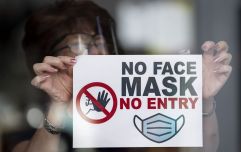 Brits who refuse to wear a mask will face fines

END_OF_DOCUMENT_TOKEN_TO_BE_REPLACED

Dewa Nyoman Rai Dharmadi said: "They are not only violating, but deliberately provoking in public, so it’s only proper to sanction them more severely, not just with a fine but also deportation."

Bali's mandatory mask rule means that foreign nationals receive a fine of IDR1 million ($68.76) the first time they are caught without masks, while a second violation may subject them to deportation.

The pair of influencers have now released a grovelling apology video alongside their legal team. In the video they say that their prank was not intended to disrespect the mask rule or to encourage others not to wear masks, but to "entertain people".

popular
Robinho to begin prison sentence after rape conviction appeal is rejected
Man kept as slave in shed for 40 years on Wales caravan park
Marvel actor Gaspard Ulliel passes away aged 37 in ski accident
Barcelona willing to pay £45m for Brazilian 15-year-old
British Airways cancels flights to US after 5G concerns
FA investigating Arsenal yellow card over 'suspicious betting patterns'
'My cat is so huge everyone thinks he's a dog - and he's still growing'
You may also like
News
Wearing masks is 'single most effective way' to beat Covid, study finds
News
Boris Johnson seen maskless in hospital despite MP cases rising
Entertainment
Kanye West spotted in number of mysterious masks and we have no idea why
News
Teacher beaten by parent on first day of school over mask dispute
News
Anti-masker detained in Singapore mental hospital after refusing to wear mask
Next Page