Another passenger was wearing an even lower cut top without issue

A former Miss Universe was told to "cover-up" before boarding an American Airlines flight to Cabon San Lucas, a decision her sister has labelled "f***ed up".

END_OF_DOCUMENT_TOKEN_TO_BE_REPLACED

Aurora Culpo spoke about the incident on her Instagram stories, revealing how her sister Olivia was called to the front of their gate only to be told to put on a blouse, or risk being stopped from flying.

In the following clip, the 29-year-old Sports Illustrated cover girl covers up in an oversized grey hoodie.

She is then seen comparing her original outfit to another passenger, who is also wearing a crop-top and leggings. 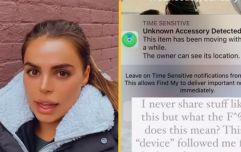 END_OF_DOCUMENT_TOKEN_TO_BE_REPLACED

“That’s weird,” the woman said of AA’s request for Culpo to cover up, admitting that her own outfit was lower cut than the celeb’s.

Re-posting the story to her own account, Olivia wrote: “Leave it to Aurora to cause a scene. Hide me.”

American Airlines is yet to comment on the incident.