easyJet is making some changes to its flying policy to stamp out lateness.

The Independent has reported that the low cost airline will now turn away would-be flyers who arrive less than 30 minutes before their flight.

People trying to pass through the security barriers once the 30 minute limit has passed will be instead asked to pay £80 to switch to another flight.

The airline is looking to crack down on 'Have A Go' or HAG travellers, who take advantage of the unchecked baggage rule to turn up late to flights to avoid queuing.

One member of the JOE team has a friend who would repeatedly turn up with moments to spare before flights, only to it as an excuse to push to the front of the queues while at the airport.

But as the holiday season approaches, easyJet has asked staff at Gatwick Airport to re-programme its security barriers, so travellers with a boarding time of less than half an hour would be turned away. Travellers who are refused access will be told to return to the easyJet desk "to rearrange their travel arrangements."


An easyJet spokesman said the move was being brought in to benefit passengers "so that they do not needlessly clear security at the point where the gate is already closed. If a flight is known to be late, some leeway will be given." 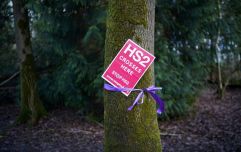 HS2 protesters take to the trees to halt construction

END_OF_DOCUMENT_TOKEN_TO_BE_REPLACED

The spokesman said the barrier closure is “dictated by live flight data, based on the actual time of the flight and not the scheduled time".

The practice is in line with something British Airways practice at Heathrow. At the time of writing, easyJet sells a 'missed flight cover' for £7.50 that travellers purchase prior to their flight that can give them a free refund, or hop onto the next flight in the event of lateness.

But if you don't buy your cover, you will have to pair the full £80 fee to switch flights.

One more thing to bear in mind if you fancy a summer holiday.

Fingers crossed it's sunny this summer in the UK and you don't have to fly, eh?

Do you have any flight tips? Let us know at [email protected], or drop us a message on Facebook.


popular
The most overrated (and underrated) gym exercises of all time
Who is the most handsome footballer in the Premier League?
Young guys absolutely lose it hearing Phil Collins' In The Air Tonight for the first time
Bryan Cranston confirms a Malcolm in the Middle reunion happening this week
The 11 unbreakable rules of making a cup of tea
England could lose several promising youngsters to Jamaica
QUIZ: Name every WWF champion from the Attitude Era

You may also like
News
Ryanair says it plans to resume 40% of flights in July
Life
Race to Amsterdam: Luxury train vs budget plane
Sport
Want to watch Liverpool in New York City? Here's the place to go
Entertainment
Disney to begin work on a Marvel Land at their theme parks
News
Heathrow Airport to replace passport checks with facial recognition technology
Next Page