Is this satanic erotica available on Amazon? Asking for a friend

The Spanish Bishop who fell in love and later married a satanic smut writer has been stripped of his powers by the church.

END_OF_DOCUMENT_TOKEN_TO_BE_REPLACED

Xavier Novell Goma was declared Spain's youngest Bishop in 2010 upon his appointment to Solsona aged 41.

But God apparently had other plans.

Goma has now been stripped of his church powers, which are apparently not super powers after he married Silvia Caballol- a psychologist turned satanic sex author.

Spain’s youngest bishop, Bishop Xavier Novell Goma, the bishop emeritus of Solsona has been stripped of his church powers after he married a psychologist-turned-author of satanic erotica, Ms. Silvia Caballol. pic.twitter.com/lfObriknL6

END_OF_DOCUMENT_TOKEN_TO_BE_REPLACED

The decision was made at an episcopal conference on December 11.

A statement reads: "As is publicly known, Bishop Xavier Novell Goma, bishop emeritus of Solsona, has contracted a civil marriage with Ms Silvia Caballol, on 22 November, 2021 in the town of Suria, in the province of Barcelona."

While his title has remained intact, Goma can no longer perform activities and duties relating to the role, which does include "any teaching activity, both in public and private". 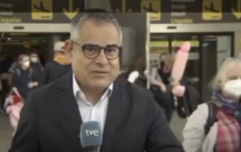 END_OF_DOCUMENT_TOKEN_TO_BE_REPLACED

He is also forbidden from "exercising all the rights and responsibilities inherent in the episcopal function".

While the Bishop is reportedly pro-conversion therapy and exorcisms, he must have a particularly strong interest in literature to turn to the dark side.

"I have fallen in love and want to do things properly," he said in August after stepping down from his official church position.

While the book is unfortunately in Spanish, Google Translate does exist for this exact reason- so have fun satanists.