The American model Bella Hadid joined the New York protests over the weekend in support Palestine amid the ongoing conflict with Israel. 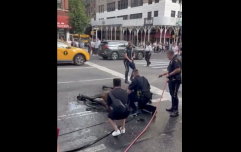 END_OF_DOCUMENT_TOKEN_TO_BE_REPLACED

The model posted an image of herself crying about the violent conflict before attending the protests on her Instagram story yesterday.

Captioning the image, Hadid wrote: "I feel a deep sense of pain for Palestine and for my Palestinian brothers and sisters today and everyday. Watching these videos physically breaks my heart into 100 different pieces."

She continued: "You cannot allow yourself to be desensitized to watching human life being taken. You just can’t. Palestinian lives are the lives that will help change the world. And they are being taken from us by the second. #FreePalestine."

Bella Hadid, whose father is Palestinian, joined the crowds in Bay Ridge, New York, on Saturday to campaign against the ongoing violence in the Middle East.

END_OF_DOCUMENT_TOKEN_TO_BE_REPLACED

In videos and images posted on her Instagram account, Bella was captured marching with a group of friends and waving a Palestinian flag as she walked down the New York streets.

In the caption, Hadid wrote: "The way my heart feels.. To be around this many beautiful, smart, respectful, loving, kind and generous Palestinians all in one place...it feels whole! We are a rare breed!! It’s free Palestine til Palestine is free!!! P.s. The Palestinian drip is real."

The Israeli actress Gal Gadot has also called for the conflict to end, but was largely criticised on social media after her post.

Gadot shared a post on Twitter in which she called for the hostility to end and for a solution to enable the two sides to live together peacefully.

However, Gadot had to de-activate the comments on Twitter after she received a huge backlash for claiming that Israel was "at war."

your country is not at war gal gadot. it is systematically killing and displacing palestinian families. 40 palestinian children injured and 10 children have been murdered by israeli forces. it's not a war, it's genocide. #GazaUnderAttack #PrayForPalestinehttps://t.co/Cc8eC9RjrS

Following the Israeli air strikes on Sunday, the total number of people who have died in the attacks in the Palestinian territory of Gaza has risen to 197, with more than 25 per cent being children.

In Israel, 10 people have been killed, including a five-year-old child.

popular
Dana White claims UFC fans who illegally streamed fights have been 'f****** smashed'
M.U.S.T release statement after embarrassing Brentford defeat
Pedophile chugs liquid and dies in court shortly after he's convicted
Lisa Kudrow hits back at fans complaining about lack of diversity in Friends
Gary Neville highlights Erik ten Hag decision that 'backfired spectacularly' at Brentford
Landlord faces £40k fine after tenant puts swimming pool on roof of flats
Chilling moment man with knife and balaclava is captured wandering around family's living room
You may also like
Crime
Moment pedestrian is knocked down by motorist - then robbed as they lay in critical condition on road
News
Prince Andrew is facing yet another legal battle over Jeffrey Epstein claims
Entertainment
Noel Gallagher is banned from China for life after being branded an 'enemy of the people'
News
Horrific moment homeless woman thrown on to tracks by man who argued with her
News
Person of interest named in Brooklyn subway shooting
Next Page