Russian ambassador to Turkey dies after shooting in Ankara

Andrey Karlov, the Russian ambassador to Turkey, has reportedly died after being shot by a lone gunman at a photo exhibition in Ankara.

Ambassador Karlov, who was 62, was rushed to hospital but died from his injuries.

BREAKING: Russia's ambassador to Turkey has died after being shot in Ankara, according to Russian Foreign Ministry spokeswoman.

“This is a tragic day in the history of Russian diplomacy. Today, Russian Ambassador to Turkey Andrey Karlov died after being shot at during a public event in Ankara,” Russian Foreign Ministry spokesperson Maria Zakharova is quoted as saying by RT.com.

According to the BBC, which cites Russian news coverage, several other people have been injured in the incident. 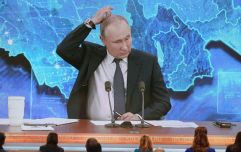 END_OF_DOCUMENT_TOKEN_TO_BE_REPLACED

The incident is said to have taken place at an exhibition entitled 'Russia as seen by Turks', and a number of individuals have shared photos and videos on social media.

The gunman is yet to be fully identified at the time of writing, but he is reported be a 22-year-old off duty police officer and to have made reference to the ongoing events in Aleppo, Syria, with the BBC reporting that he said "Don't forget about Aleppo, don't forget about Syria."

He is said to have been "neutralised" following the initial shooting, with RT quoting the Anadolu news agency which states the attacker has been killed by Turkish Special Forces.

This is a developing story and we will provide more information as and when it emerges.

popular
The JOE Friday Pub Quiz: Week 232
Aldi announce new packaging ban to come into action across supermarkets nationwide
A definitive ranking of every swear word from worst to best
Scarlett Moffatt Discovers ‘30% Rain’ On Weather App Doesn’t Mean Chance of Rain
Slowthai agrees to stop spitting in fans' mouths at gigs due to Covid-19
Making your bed is actually bad for you, doctor claims
UEFA likely to choose England as sole host nation for Euro 2021
You may also like
Health
In Russia, several cases of bird flu have been found in humans
Sport
Spartak Moscow troll Celtic over controversial trip to Dubai
Sport
Russia banned from Qatar World Cup and Olympics after appeal
News
Russian pilots under investigation for drawing penis on flight map
Politics
Russia claims its 'Sputnik V' COVID-19 vaccine is 92% effective
Next Page