There'll be a whole bunch of people nursing hangovers in Reading and Leeds on Monday morning.

The twin festivals closed out the Bank Holiday weekend, with Eminem closing Leeds and Muse headlining Reading on Sunday night, and what more is there to say about Eminem apart from, in his own words: Rap God. 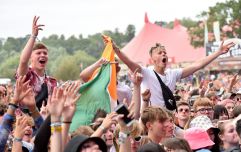 Reading and Leeds 2022 lineup: Artic Monkeys, Dave and Rage Against the Machine to headline

END_OF_DOCUMENT_TOKEN_TO_BE_REPLACED

Muse have headlined every festival in the UK a thousand times over. Everyone knows they're amazing live, which is why festivals keep booking them: they want the big guitars, the big choruses, the big stage productions, the big everything. Muse are big, okay?

But during their headline slot at Reading, Muse got to their knees and prayed to something bigger than themselves: the rock gods that came before them.

Figuratively speaking, that is. Literally speaking? They brought out AC/DC singer Brian Johnson and covered Back in Black.

"He's back!" singer Matt Bellamy announced, before launching into the rock classic. And boy, did they launch. "Thank you so much. Thank you, boys," Johnson said at the end of the song. 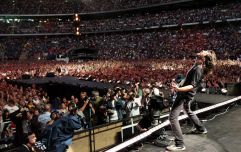 END_OF_DOCUMENT_TOKEN_TO_BE_REPLACED

As rock fans will know, Johnson bowed out of AC/DC last year following hearing problems. This marks only the second time he'd been on stage since then, and you wouldn't even know: the 69-year-old was in full voice and sounded fantastic.

Muse were visibly delighted that the rock legend was actually there on stage with them, with singer Matt Bellamy breaking into a massive smile as he hugged Johnson.

Reading, count yourselves lucky. You saw something special on Sunday night.