Arctic Monkeys have announced their return, confirming their first tour date of 2018.

Ahead of their much anticipated sixth album, which is expected later in the year, they have confirmed they will headline Firefly Festival alongside Eminem and Kendrick Lamar.

The festival takes place in The Woodlands of Delaware from June 14-17.

The Woodlands are calling 🌳🌲☀️ 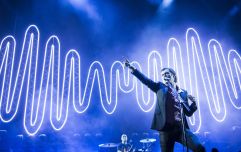 END_OF_DOCUMENT_TOKEN_TO_BE_REPLACED

It’s already known that recording for their next album began at the end of last year.

According to NME, O'Malley spoke to motorcycle website For The Ride back in September, with the article stating that "Nick found time for the track day before recording began on the eagerly anticipated sixth album, started at a secret location in September. The new album will be out next year because 'if it isn't, we've got problems'."

popular
Patrick Vieira appears to kick fan after Everton defeat
Johnny Depp's lawyer Camille Vasquez responds to romance rumours
'I did three grams of coke during a game': Inside football's problem with Class A drugs
Amber Heard's acting coach explains exactly why she believes her tears are real
Man United cancel end of season awards after player requests
Johnny Depp's attorney Camille Vasquez revealed to be dating Brit
'Wow, hats off to her! Sick remark from Bobbi Anne McLeod's killer after she survived 12 hammer blows
You may also like
Music
Liam Gallagher tipped as favourite to headline Glastonbury 2019
Entertainment
This is what the ‘I Bet You Look Good On The Dancefloor’ girl looks like now
Music
Arctic Monkeys release behind-the-scenes documentary showing the making of Tranquility Base Hotel & Casino
Music
QUIZ: Can you complete the Arctic Monkeys song lyrics?
Entertainment
WATCH: Arctic Monkeys play intimate version of 'A Certain Romance' at final Sheffield show
Next Page