We were rooting for this.

You may remember reading this story on JOE where a boy called Josh had been texting this girl on Tinder called Michelle on and off for three years.

END_OF_DOCUMENT_TOKEN_TO_BE_REPLACED

The messaging began back in September 2014 and the latest message was sent at the start of July 2017 and normally around three or four months separate each message.

Josh posted the conversation on Twitter and captioned the photo, "Hahahaha one day I'm going to meet this girl and it's going to be epic."

Well, you know what, Josh is going meeting Michelle and it is going to be epic.

They had been chatting over Tinder and the messages obviously got the attention of the dating app and they felt like they needed to intervene...

It’s time you got together IRL. You have 24 hrs to decide the city you want to have your first date in and we’ll send you there! @mch_rnd https://t.co/7r2JQtcxKC

Of course, in typical Josh style, he kept Tinder waiting but did reply within five hours later.

After a long debate over your unbelievably generous offer, our dream first-date would be in Hawaii. Meet you in Maui?? @mch_rnd 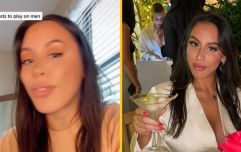 END_OF_DOCUMENT_TOKEN_TO_BE_REPLACED

It's not every day you're going to go on a free holiday with the girl of your dreams and Josh wanted to make sure that his dream girl got a dream first date.

He's followed Michelle on Twitter in the last few days and tags her in the reply requesting to go to Hawaii for a meetup.

Michelle who's username is @mch_rnd doesn't know how to take to her new found fame...

I'm a little twitter famous from my tinder messages and I still can't decide if that's embarrassing or impressive.

Tinder finally made a done deal of this long on-going saga and confirmed that they would take the couple on the unbelievably generous date.

Aloha! We're sending you to Maui but you can't take two years to pack your bags! 🏖️

This is like some sort of dream. A date in Hawaii is far more epic than I could have ever imagined. Thank you so much! https://t.co/gQD8QffLKq

When someone tells you that something is impossible and cannot be done, look to Josh for inspiration. This might just be a better will-they-won't-they conclusion than Rachel getting off the plane in Friends