A new study has suggested that the reason we fail to sleep well in new places is down to a residual survival instinct.

If you've ever slept at a mate's house or a hotel, the chances are you've woken up having had a restless and scattered night's sleep. 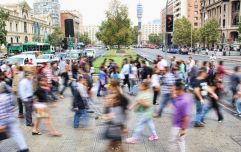 END_OF_DOCUMENT_TOKEN_TO_BE_REPLACED

Well, sleep scientists Masako Tamaki and Yuka Sasaki from Brown University have conducted a study on people's brains as they slept, and found that in a new environment only half of the brain sleeps, while the other half (the left hemisphere) remains alert.

Sleep scientists call it the First-Night-Effect (FNE), and it has affected humans for years, but it was never fully understood before now.

The study, which can be read here, found that a person's brain had asymmetrical patterns of sleep activity, with one half of the brain remaining active, although not fully alert, and reactive to outside stimulus. This trait is also present in some animals such as dolphins and whales who are vulnerable when asleep and need to remain alert.

The scientists are hopeful that they can discover a way to shut off this trait now that they know more about it, meaning those who travel regularly for work or pleasure might start getting a better night's kip.

popular
End of life 'suicide capsule' machine gets approval in Switzerland
World's population set to decline for first time in modern history
A definitive ranking of every swear word from worst to best
Juan Cuadrado leads complaints over suspect goal in Colombian promotion clash
Shocking video shows CEO fire 900 people on Zoom call
Jimmy Carr slaps down anti-vaxxer in crowd with brutal one-line dig
Here's how to see who's been taking screenshots of your Instagram Stories
You may also like
Life
Prince Harry says quitting jobs to protect mental health should be celebrated
News
Men spread covid more than other populations, study shows
News
Maskless London commuters fined over £30k in just one day
Sport
Second half of Southampton Leicester delayed due to medical emergency
Sport
Watford Chelsea game suspended due to medical emergency in stands
Next Page