Trying to find the perfect Christmas gift can be a little trying, to say the least.

If only there was something with practical usage but with a novelty feature that was sure to put a smile on anyone’s face. 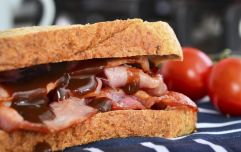 END_OF_DOCUMENT_TOKEN_TO_BE_REPLACED

According to a 2010 study by Perishable News, 43 per cent of Canadians prefer bacon to sex. This product is designed for those who no longer want to decide between the two. A pair will set you back $20 and are available to order here.

For those less enthusiastic about the association of their special places and bacon, there’s also a bacon-scented pillow. It will allow you drift asleep to the soothing smell of fatty meats.

The products are available at J&D’s, a company started by two pals who won money on America’s Funniest Home Videos. Their founding product was bacon salt and they’ve since invested in a heap of other bacon related goods.

Be warned though, the site advises the underwear should be avoided by those 'who have a large dog with razor sharp teeth'. We’ll leave that one up to the imagination.

popular
QUIZ: Who plays here? Match the clubs to these 50 stadiums
Blind woman, 95, survives 13-hour ambulance wait by sucking moisture from tissue
Child abusers could now face life in prison under government-backed plans
Roy Keane's three leadership tips he gave to Owen Farrell can't be argued with
Pep Guardiola claims Man City are facing a player 'emergency'
Edison Cavani happy for Jadon Sancho after he overcame 'tough period' at Man Utd
Lionel Messi to put seventh Ballon d'Or in Barcelona museum
You may also like
Food
McDonald’s customer ‘vows to go vegan’ after 'finding pig nipple’ in his bacon roll
Food
American politician ridiculed for eating snack of Oreos wrapped in bacon
Food
How to make the ultimate bacon sandwich
Entertainment
Eastenders viewers are livid at the cost of a coffee and bacon sandwich in Kathy's
Food
'Millionaire's bacon' is the new food craze everyone's talking about and it looks INTENSE
Next Page