Whatever makes you happy...

A man has undergone a rather intense series of body modifications to make himself look like a 'black alien'. Yep.

END_OF_DOCUMENT_TOKEN_TO_BE_REPLACED

Anthony Loffredo, 33, began his life-changing transformation around a decade ago, starting off with tattoos and piercings before ramping up the stakes fairly significantly.

He has been updating his nearly 800,000 Instagram followers on each stage of his rather jaw-dropping journey for years. We'll warn you, some of these aren't graphic as such - but they are certainly striking: 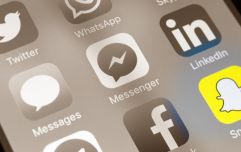 END_OF_DOCUMENT_TOKEN_TO_BE_REPLACED

As you can quite clearly see, the full list of cosmetic surgeries he's had is quite extensive: it includes everything from having his tongue cut in half, dermal implants inserted to make his bone structure look more bumpy and alien, eyeball tattooing (a procedure which entails a serious risk of going blind) and having his top lip removed.

However it doesn't stop there...

Loffredo has travelled all over the world to find places that would carry out his bold body modifications; last year, he travelled to Spain to have his nose removed. Yes, his nose - it certainly adds to the overall look.

END_OF_DOCUMENT_TOKEN_TO_BE_REPLACED

While many people are understandably shocked when they first see his unconventional look, plenty find it empowering to see him going to such lengths to look how he wants and feel comfortable in his own skin.

For those already troubled by his appearance and concerned that he will regret this massive overhaul down the line, they'll be pleased to know that he is no way near done, having not long posted his nose surgery pic with the caption: "Black alien project evolution 18%".

In perhaps the most alarming of all his surgeries, last week he went all the way to Guadalajara, Mexico to amputate two of his fingers in order to make his hand look like an 'alien claw'. Crikey.

In case you still had any reservations as to how serious he is about his 'black alien project', this should surely let you know otherwise. You can't say he isn't committed.

While he is still waiting for the two fingers on his right hand to be removed, we speak for everyone when we say Anthony is well and truly on his way to becoming the 'black alien' he's always wanted to be.