David Bowie's son says that he doesn't really like music

During their chat, Duncan revealed that he isn't a huge fan of music in general, comparing listening to a song to watching your father doing accounting.

"I never really got into music. It's like work - watching your Dad do accounting. I listen to a lot of CNN and watch a lot of news".

This is a great statement, but if your Dad is David Bowie, watching him doing literally anything would surely be kind of cool, if not for you, at least for your Snapchat followers? Imagine getting to see David Bowie wrestling with the lawnmower trying to get it out of the way so he can pull the barbecue out? I'd watch that for ninety minutes and never get bored. 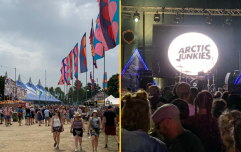 END_OF_DOCUMENT_TOKEN_TO_BE_REPLACED

Duncan explained that his interest has always lied in movies rather than music, which is fair enough tbh. But to not like music at all? This baffles me. What does he listen to in the car? How does he drown out the irritating voice of Carol in accounts when she's seen great results from her latest fad diet and has to tell everyone about it? Music is an essential part of everyday life.

I don't want to rag on the guy too hard, but I think he should give music a second chance. Maybe start with something easy like 'Doctor Jones' by Aqua (it's got his surname in it so maybe a bit of familiarity will make him feel safe), then progress into a smidge of Liberty X ('Song 4 Lovers' is a relentless banger - the version featuring Rev Run, obviously) and top things off with 'All The Young Dudes' by Mott The Hoople, it was written by Bowie but maybe Duncan won't remember so we can trick him into admitting that his Dad was class and music is not a bad thing.

Duncan, if you're reading this, please hit me up. I will make a banging playlist to change your mind about music. Trust me. Please.