Aldi now sell super-cheap musical instruments, so you can finally start a terrible band with your mates

Aldi are taking you one step closer to at least two of those dreams by stocking super-cheap musical instruments.

END_OF_DOCUMENT_TOKEN_TO_BE_REPLACED

The supermarket chain have been playing an absolute blinder this summer, introducing everything from slip-n-slides to having their gin named as one of the best in the world.

Now they're getting into the music business, selling guitars, keyboards and percussion instruments for almost next to nothing.

For example, you can get this black acoustic guitar for just £34.99.

Or one of these nylon-stringed guitars for the same price: £34.99

Don't fancy being a guitarist? Try this keyboard for £69.99

Or if you fancy yourself as more of a Bez-type figure, there's this percussion selection for £9.99 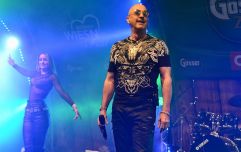 END_OF_DOCUMENT_TOKEN_TO_BE_REPLACED

Now, while a £34.99 guitar probably won't be the greatest instrument in the world, it's still there at your disposal. In fact, you should have more than enough there to write at least three or four number one singles.

The instruments go on sale in stores from Thursday 10 August. Check out Aldi's musical instrument selection.