A movie based on Star Wars: Knights Of The Old Republic is in the works

This is a very good use of the franchise

A movie based on the beloved Star Wars video game Knights Of The Old Republic is reportedly being written.

END_OF_DOCUMENT_TOKEN_TO_BE_REPLACED

Sources for Buzzfeed say that the screenplay based on the 2003 game is being written by Laeta Kalogridis, whose previous credits include Avatar and Shutter Island.

While there have been many, many Star Wars games, the two Knights Of The Old Republic RPGs remain some of the best-reviewed and most beloved by fans.

The first instalment hit Xbox, PC and Mac in 2003. It stood out from the rest of the franchise by being set 4000 years before the movies and focused on a new set of characters.

One of the game's unique features was that it allowed players to pick their own path, and lean into the light side or the dark side of the Force. The player's actions would dictate what path they took, from dialogue choices to major plot decisions.

The game was followed by a sequel with Star Wars: Knights of the Old Republic II – The Sith Lords in 2004, which received similar critical acclaim.

A third entry in the series was cancelled, but 2011 saw the release of MMORPG Star Wars: The Old Republic, from the developer of the original game BioWare and set in the same time period. 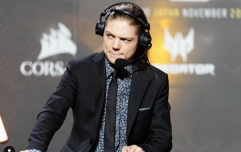 END_OF_DOCUMENT_TOKEN_TO_BE_REPLACED

Earlier this month, Disney released an updated release schedule that revealed that three new Star Wars movies were on their way, following this year's Episode IX: The Rise of Skywalker. It was later confirmed that the first of those, which will hit in December 2022, will be written and produced by Game of Thrones creators David Benioff and D. B. Weiss.