It's the controversy that has been gripping the platform in recent weeks.

The Twitch hot tub story has been a while ride. If you're not familiar with it, it goes a little something like this: Twitch's policies allow content creators to wear certain clothing if it is in an appropriate setting, meaning that people have begun streaming from hot tubs in nothing but swim wear. 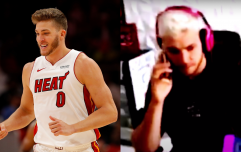 END_OF_DOCUMENT_TOKEN_TO_BE_REPLACED

Now it probably won't surprise you to hear that these streams of mainly women sitting in a hot tub or pool in nothing but a bikini, whilst chatting and performing challenges are rather popular. However many have claimed that they are inappropriate, and the trend has questions about what is and, more importantly, isn't suitable for the platform.

After initially banning the search term, and then pulling advertising revenue from some hot tub streamers, Twitch has now launched a dedicated category for hot tub streams, called "Pools, Hot Tubs, and Beaches."

Whilst this category will largely consist of what you'd expect it to, there are a few surprises in there.

As Rock Paper Shotgun discovered, a group of otters have managed to climb the popularity ranks in this new category.

The Marine Mammal Rescue Centre in Vancouver has been streaming animals in the Travel & Outdoors category for months now, but they have taken the bathing and floating of their rescued otters to the hot tub meta now as well, and have found a new audience.

At the time of writing, they were live-streaming to an audience of over 4,500, in what the centre has branded the "#1 Cold Tub Stream."

And their stream is only growing in popularity, with a video of the otter currently sitting at third place in the most watched videos in the category, having been viewed 368,000 times.

If you want some otter action and visual ASMR in your day, then how about you take 10 mins out and enjoy the little guys here.

popular
New Zealand to ban young people from ever buying cigarettes
Boris Johnson's wife Carrie gives birth to second child
Ant & Dec make another dig at Boris Johnson and No 10 party cover-up
ITV News' intro to Downing Street Christmas party clip is absolutely brutal
Emotional Robbie Savage introduces son Charlie's Man Utd debut while on commentary duty
Identical twins trying to get pregnant at same time with shared fiance
Met police to review leaked video of Downing Street aides joking about Christmas party
You may also like
Sponsored
Everything you need to take your streaming set-up to the next level
News
Suspect dead in Madden tournament shooting streamed on Twitch, police confirm
Sport
Dele Alli streamed himself playing Fortnite via Twitch while the Champions League semi-final was on
Sport
The 10 Greatest FIFA Songs of All Time
Sport
FIFA 22 is an exercise in fine tweaks, not a major overhaul
Next Page