Coronavirus panic is taking a devastating toll on Chinatown

The first cases of COVID-19, also known as the coronavirus, in the United Kingdom were confirmed on January 31, 2020. 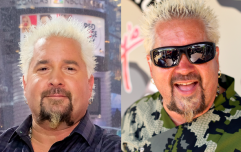 END_OF_DOCUMENT_TOKEN_TO_BE_REPLACED

The virus first came to the attention of the World Health Organisation on New Year's Eve 2019, before the WHO confirmed the new coronavirus causing respiratory illness among a cluster of people in Wuhan, China on January 12.

Since then the disease has spread to more than 100 countries, with Italy the worst affected outside of China. The country's Northern region has now been completely quarantined by the government, with the inhabitants of 15 provinces requiring special permission to leave.

Though the situation in the United Kingdom remains less serious, the outbreak of the virus on these shores has had a devastating impact, particularly on the Chinese community and its business.

We went to London's Chinatown to speak to the owner of a usually thriving restaurant, who reveals just how much the virus has affected people's behaviour and his business.

popular
Some Stranger Things fans are now trying to cancel Metallica
Runner finishes last in 400m race as penis keeps falling out of shorts
Man books first-class flights for himself and his best friend - but leaves wife in economy
'Empty Old Trafford' trends as Man Utd fans look to send Glazers a powerful message
Pete Davidson in 'trauma therapy' after being 'triggered' by Kanye West's harassment
Tens of thousands rush to sign-up to 'Enough is Enough' campaign - crashing their website
Mystery of Olivia Newton-John's ex-boyfriend who vanished on fishing trip 17 years ago
You may also like
News
Prince Andrew is now banned from public return at ancient ceremony after missing Jubilee 'due to covid'
Life
Spain to welcome back unvaccinated Brits 'within days' just in time for the summer holidays
News
Beergate: Labour denies Keir Starmer broke lockdown rules after memo leaked
Coronavirus
Severe covid can cause brain impacts equivalent to ageing 20 years, study finds
News
Horror as elderly man pulled from body bag alive moments before he was due to be cremated in China
Next Page