One of Netflix's newest shows, Santa Clarita Diet, has been a huge hit with viewers.

It stars Drew Barrymore as a real estate agent who comes back to life with a hunger for human flesh, falling somewhere between a zombie and a cannibal. She sets out on her new diet while trying to maintain her normal life.

END_OF_DOCUMENT_TOKEN_TO_BE_REPLACED

The show gets pretty gory at times with Drew's character Sheila chomping down on all sorts of human organs.

But, like all movies and TV shows, they've found a pretty convincing way of showing her eating the body parts.

This is where prosthetic makeup effects designer Christien Tinsley comes in. He is in charge of making the props look like the real thing. He spoke to NY Post about choosing the right food for the job:

"There were so many things you couldn’t use. I would have said let’s get some raw tuna, sushi-grade, and bloody it up and make life easy and it didn’t work that way. We ended up defaulting to gummy bear formula."

"It’s gelatinous, it’s translucent, we can cast it into food-grade molds we created to look like meat and visceral tendon, and we could paint them with food dyes." 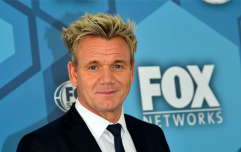 END_OF_DOCUMENT_TOKEN_TO_BE_REPLACED

He also used coloured pasta to look like minced meat and beetroot and bananas smoothies to act as the blood shakes.

As for the fake blood, which there was a lot of throughout the show, they used water and methyl cellulose, which is also used to fill doughnuts.