Congratulations, you've made it through another week

Despite all this political strife, despite protestors standing on the roof of the tube, despite the staff in Boots being unnecessarily abrupt with you when you pop in on your lunch break. (Yes I can and will hold a grudge, Carol.) 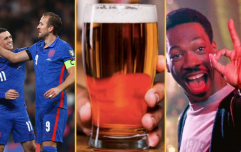 END_OF_DOCUMENT_TOKEN_TO_BE_REPLACED

You've done it. You've managed to reach Friday. You've come through it all, hurdling every obstacle with all the grace and poise of a, well, hurdler. A good one. Maybe not quite Olympic level but at least capable enough to appear at the Alexander Stadium whilst in secondary school and go home with a bronze.

Anyway. Hats off to you. To celebrate the fact, the fact that you've made it, here is a quiz featuring rounds on Arnold Schwarzenegger, The Rolling Stones and late nineties/early noughties cartoons to accompany the old staples of any self-respecting pub quiz: sports and general knowledge.

I guess all that's left to say is: 祝好运 . That's good luck in Mandarin, you idiot. Good luck to you all. Except you, Carol. Not you. Everyone but you.