Who would have thought that watching an iguana run away from a bunch of snakes would be the most intense thing on TV?

There was not a single heart that had not leapt into a mouth when the BBC broadcast the episode of Planet Earth II featuring the epic chase now known as 'Iguana vs Snakes'.

It was more of a white-knuckle ride than most movies, a drama that even the most talented of writers could not construct.

So how could it possibly be bettered? What more could you add to improve perfection?

A man by the name of Snoop Dogg. 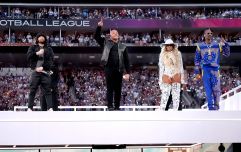 END_OF_DOCUMENT_TOKEN_TO_BE_REPLACED

Snoop swung by Jimmy Kimmel Live! the other day to revisit a popular feature - Plizzanet Earth with Snoop Dogg.

The rapper had already lent his dulcet tones to Planet Earthnarrating a scene, ably in which tree frogs get down to it. Now he's back, and let's just say that Snoop's style of narration gives 'Iguana vs Snakes' a bit of a different flavour.

It's perhaps less intense - though who can forget the moment when the snakes wrap themselves around the poor iguana, whose death was surely imminent - but it's a damn fine piece of narration. Attenborough better stay on his toes.