Remembering the time JLS all played Mario Kart Wii together

It was a simpler time.

Seven years ago, something undeniably life-altering happened. Sophie Dahl and Jamie Cullum got married in Hampshire. It was a lavish ceremony complete with A-list guests and an assortment of vol-au-vents.

END_OF_DOCUMENT_TOKEN_TO_BE_REPLACED

Also, JLS got together and played a game of Mario Kart on the Nintendo Wii all in the name of consumerism.

Please, indulge yourself in 31 seconds of pleasure (in standard definition) before you read on. You deserve it.

This gripping tale commences with Aston announcing that everyone should "be a Mii". Already, he's isolated any viewer that isn't familiar with the inner workings of the Nintendo Wii, but that's precisely the type of behaviour we've come to expect from such a loveable scamp like Aston Merrygold. 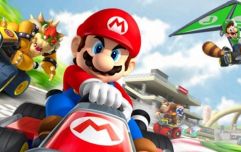 END_OF_DOCUMENT_TOKEN_TO_BE_REPLACED

Oritsé lets us know that he's "the red one", which will come in handy should the game lose its ability to correctly identify each player, a core facet of every gaming system since they were first invented in the 1960s.

Before the game commences, it's important that we look at inner workings of how JLS have allocated the controllers. Regardless of this being an advertisement for the Nintendo Wii, which assumedly means they had access to an unlimited amount of gaming resources, two of the band members are using dual controllers as opposed to the official Mario Kart steering wheels.

Oritsé and Marvin are using the standard Wii remote and Nunchuk combination, while Aston and JB have lucked out with the steering wheels. It's no secret that they're at a distinct advantage as they'll get to mimic the driving manoeuvres with greater ease than the two boys using a glorified joystick and a mouse. 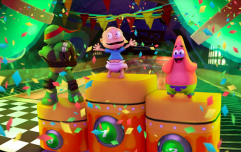 Nickelodeon are releasing their own Mario Kart game

END_OF_DOCUMENT_TOKEN_TO_BE_REPLACED

Is there a deeper meaning to this allocation? We all know that Aston is the main JLS band member, but is JB trying to assert himself as the second most important? Forgive my ignorance, but I always assumed the hierarchy of importance went Aston, Marvin, Oritsé and then JB, based on nothing other than that's the order of names that I'm most familar with. But JB, although placed on the outside edge both in this couch formation and in most performances, is making a play for the limelight. He's hungry for adoration.

But what about poor Marvin? He's the guy that's married to one of The Saturdays. He wears very low cut tops, he's arguably the best looking and he's friends with Niall Horan. Why has he been lumped with a Wii remote and Nunchuk? Is there a struggle for power within the band? Does he want out?

Let's talk about why Aston, two seconds into the game, says 'MUSHROOOMS'. They hadn't passed any boxes on the track to get a power-up at this point, so what was the logic? Was Aston expressing an interest in subsequently securing some mushrooms with a view to enlarging his character to thereby flatten opponents? Or was this about something deeper?

In terms of height, Oritsé, Marvin and JB all tower over Aston who's 5 foot 4 inches tall. It's likely that his keen interest in the Mario Kart mushroom is due to a deep-rooted desire within him to double in size. He's easily the best singer, but why can't he also be the tallest member of JLS? Technology can make a Mario Kart character twice its original size, why can't Doctors do the same for Aston Merrygold?

Before the viewer has time to look deeply into Aston's insecurities, JB hits the others with a lightning strike. It's a bold move from a guy that's in 11th place, but one that he's all too comfortable making. It's part and parcel of the Mario Kart experience. You have to indulge in some sneaky behaviour to get ahead, especially if you're not very good at the game at hand. He even offered up a cheeky "Who's ready for the lightning strike?" before he unleashed it, much to the amusement of nobody. But how did his bandmates react to this senseless act of violence once it came into effect?

Oritsé can't believe the audacity of JB, Marvin's trying to figure out the best way to move his body so as to show off his ample cleavage and Aston is worried that the lightning strike might impact his chances of finding a mushroom. But look at JB. He's having the time of his life. He's got a steering wheel controller and he just slowed down the rest of the lads. JB's still in 11th place, but at least he's happy.

Oritsé's calm reaction to JB's lightning strike is quickly explained as he responds with a swift inking to the rest of the lads. He'd been saving it up for a while and felt that the time was right to strike, immediately after his third favourite in the band rival, JB. Oritsé throws out a quick "Yeah baby", to let everyone know that it was him.

Everything is to play for as we enter the final stretch of this gripping game of Mario Kart Wii with JLS.

The inking appeared to give Oritsé precisely no advantage as he's still in 12th place near the finish line, he started and remained in that place, so at least he's consistent. Poor Aston slipped to third place after feeling the effects of a lightning strike and an inking. But look at the upper left hand corner of his screen, he's got a mushroom AND HE HASN'T USED IT. What? He was gunning for a mushroom from the outset, was then lucky enough to find one and simply let it sit idly by as he slipped into third place. Is this some kind of warped power move? Perhaps he wanted to win the game honestly, without the assistance of doubling in size. He's been 5ft 4in his entire life, and he's doing just fine.

JB's early lightning strike appears to have paid off because he's bumped himself up to 5th place towards the finish line, clawing back a very decent bit of credibility after his previous 11th place listing. But the victory is Marvin's. He was in first place from the outset, all the way to the end. Marvin is the best JLS member at driving a virtual car, even with shitty controllers.

As the winner is revealed, let's quickly assess the bandmates' reactions. Marvin is suitably thrilled with his accomplishment. A remote and Nunchuk combination wasn't enough to quell his desire for victory. Aston has fallen to the floor, such is his frustration with finishing in third place. He had a mushroom. He didn't use it. He is a buffoon, he is but a jester to the rest of JLS. Oritsé's visibly miffed but taking it on the chin, as he likely realises that this is all fake. But look at JB.

The man is broken. He's lost everything. Even with a distinct advantage of getting to use the official Mario Kart Wii steering wheel, he finished in 5th place. Out of three real life people and eight computer-generated characters, JB finished 5th. He used a lightning strike on the other drivers and still couldn't claw his way high enough up the ranks for a podium finish. He's the guy in JLS whose name everyone always forgets, and now he's the guy in JLS who finishes in 5th place. JB wants a rematch. He can't face being beat again. Beat again. Beat again.