Love Island's Hayley Hughes has appeared on television before

Yeah but what is Brexit?

Hayley Hughes, AKA 'the Scouse one' from Love Island, has revealed that her appearance on ITV2's favourite drama in the sun wasn't actually her first claim to fame. 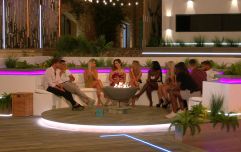 END_OF_DOCUMENT_TOKEN_TO_BE_REPLACED

During an appearance on Lorraine, with, as you might have guessed, Lorraine Kelly, Hayley described her experience on Coronation Street in which she appeared as an extra in scenes set within Audrey's salon.

"She was so nice," Hughes said of her experience alongside Corrie star Sue Nicholls.

It appears that she has caught the bug, confidently admitting that she just wants "to further my career in acting." Fingers crossed for you Hayley. Hollywood is waiting!

Often accused of being stupid, or at least acting stupid, Hayley was a divisive figure during her time on the island, particularly when she was coupled with Eyal and neither of them appeared to actually like each other much, or at all.

END_OF_DOCUMENT_TOKEN_TO_BE_REPLACED

She didn't last long however, and her and new addition Charlie became the first couple to be dumped back into the real world to appear at University club nights and maybe play in Soccer Aid next year.

Still, it was fun whilst it lasted Hayley. Hopefully we'll see you pop up on Love Island next year vocally wondering exactly what Brexit means for the trees of Great Britain.

popular
Tourist dies after losing arm and leg in shark attack at popular resort
Stranger Things: Spotify will choose which song would save you from Vecna
Jordan Peterson suspended from Twitter over Elliot Page comment - says he won't apologise
Adele fans have 'mad respect' for her after she stopped her Hyde Park gig to help someone in distress
Threesome sees 60-person brawl break out on cruise ship, says passenger
Woman sells pics of her thumbs on OnlyFans for £4,000
Vegan mum found guilty of murdering son by feeding him only fruit and veg
You may also like
Entertainment
Love Island: Ofcom receives 75 complaints as boys accused of 'bullying'
Entertainment
Michael Owen finally cracks and reacts to daughter Gemma's sexy dance on Love Island
Entertainment
Love Island star reveals why Gemma's dad, Michael Owen, has not been mentioned on show
Entertainment
Love Island fans convinced Michael Owen 'banned' name from being said after spotting key detail
Entertainment
Love Island host Laura Whitmore defends herself from criticism after ‘humiliating a broken' contestant
Next Page