Warning: this is definitely not for the squeamish

Actor David Arquette is best known for two things: starring as Deputy Dewey in the Scream movies; and marrying Courtney Cox in the late 1990s.

He is also famous – or infamous – for another thing. In the early 2000s, at the height of his fame, he appeared in World Championship Wrestling (WCW) as a PR stunt, and even ended up winning the WCW World Heavyweight Championship. It is generally regarded by fans as one of the worst moments in the history of wrestling, and considered a big reason why WCW went bankrupt.

Arquette has recently however made a return to the ring, wrestling a few independent shows in 2018.

On Friday, he was booked to face death match wrestler Nick Gage, at an indie show promoted by Game Changer Wrestling, entitled LA Confidential. Arquette was actually a last minute replacement for Joey Ryan, who you might know as the wrestler who went viral for doing flips with his penis.

Nick Gage, for the record, is one of the most notorious wrestlers in America, who’s matches often end in loads of blood. He was also sentenced to five years in prison in April 2011, after pleading guilty to second degree bank robbery.

The match ended up being ridiculously violent, and appeared to go off-script at the end, after Arquette ended up covered in blood and his neck was sliced open.

And again, warning, this is not for the weak of heart. 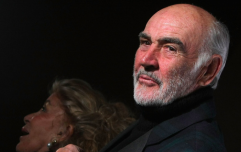 END_OF_DOCUMENT_TOKEN_TO_BE_REPLACED

Gage attacked Arquette with light tubes, and Arquette appeared to begin bleeding from his neck. At this point, Arquette appeared to abandon the original plan for the match, and try to pin Gage in order to end it quickly. After Gage kicked out twice, Arquette then simply walked out of the ring, possibly to look for medical attention.

I think it’s right about here where David Arquette got it in the jugular & he was bleeding a freaking lot. Holy hell. #JJLAC pic.twitter.com/zruTuE5VtP

Arquette then returned to the ring, seemingly fueled with real anger at Gage, throwing a chair at him. Gage however quickly covered him for the pin.

David Arquette basically shoots on Nick Gage at the end of the match. Figure Gage flipped him and told him to stay down for the pin. Once Arquette's neck got sliced, he kind of started freaking out and almost walked out of the match #GCW #JJLAC pic.twitter.com/waao3yHNHe

At a point, Arquette got really messed up. He was bleeding bad and no-sold the finish. Definitely turned into a shoot. Arquette came back out all bloody and yelled something at Gage while he was cutting a promo. Arquette took a pizza cutter to the head at one point. #JJLAC pic.twitter.com/kdznVBDNSC

'Shoot' is insider wrestling speak for going against the planned script and taking things into your own hands, FYI.

After the event, David Arquette tweeted that maybe the match wasn't the best idea after all.