Bob Saget's family reveal the exact cause of his 'accidental' death

Bob Saget died from an accidental blow to the head and no "drugs or alcohol were involved", his family have said following the comedian's death last month. 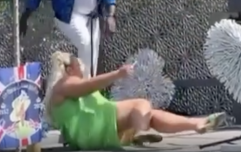 END_OF_DOCUMENT_TOKEN_TO_BE_REPLACED

The 65-year-old was found dead in a hotel room in Orlando, Florida, on 9 January and the cause of his passing has remained a mystery.

In a statement, Saget's family said: "Now that we have the final conclusions from the authorities' investigation, we felt it only proper that the fans hear those conclusions directly from us.

"The authorities have determined that Bob passed from head trauma."

The statement went on to say that authorities had "concluded that he accidentally hit the back of his head on something, thought nothing of it, and went to sleep".

END_OF_DOCUMENT_TOKEN_TO_BE_REPLACED

The family stressed that "no drugs or alcohol were involved".

"As we continue to mourn together, we ask everyone to remember the love and laughter that Bob brought to this world, and the lessons he taught us all: to be kind to everyone, to let the people you love know you love them, and to face difficult times with hugs and laughter," the statement concluded.

Saget became a household name playing Danny Tanner in Full House, as well as the narrator in How I Met Your Mother.

At the time of his death, Saget had just started a US tour, performing the night before in Jacksonville, Florida.

Posting on Instagram after the show, he said that he had "loved every moment of it".

Following his death, Saget's wife, Kelly Rizzo, described him as "the best man I've ever known' and his daughter, Lara Saget, said her father "loved with everything he had".

popular
Ex-teacher who got pregnant by former student plans to film birth so it can be taught in schools
Landlord faces £40k fine after tenant puts swimming pool on roof of flats
James May 'hospitalised after crashing into wall at 75mph filming new show'
Lisa Kudrow hits back at fans complaining about lack of diversity in Friends
Robin Williams' wife shares reason why he killed himself
Furious Reading and Leeds ticketholders demand refunds as band replaces Rage Against The Machine
Jamie Carragher trades Twitter blows with Gary Neville over Glazers tweet
You may also like
Entertainment
Brooklyn Beckham confirms he has changed his surname after marrying Nicola Peltz
Entertainment
Jennifer Lopez and Ben Affleck engaged again after 20 years
Life
Kanye writes poem about divorce: 'You're a vegetable'
Entertainment
Mum thought she was sitting next to Greg James on train so her daughter tweeted DJ to check
News
People can't comprehend Dan Bilzerian without a beard
Next Page