The puppet of Piers Morgan from the new Spitting Image has been revealed, and the man himself is not happy about it at all.

"I have waited all my adult life to have Spitting Image do a puppet of me. And then last night I got sent the image." said Morgan on Wednesday morning's show.

"And I was like, you know what? I could have waited another 40 years for this."

"As you can see, it bears no relation to me, whatsoever," Morgan continued, as he scowled to mimic the puppet's expression.

Some people did find it funny though. One, in particular, was Piers Morgan's arch Twitter rival Gary Lineker, who shared the image on his account.

The first time I can recall a spitting image puppet to be actually quite flattering, @piersmorgan pic.twitter.com/kHPDu2orCm

"The first time I can recall a spitting image puppet to be actually quite flattering," tweeted the Match of the Day host. 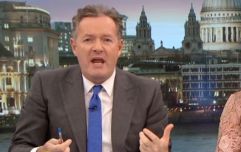 Piers Morgan asks ‘do I get my job back?’ after Meghan Markle OfCom win

END_OF_DOCUMENT_TOKEN_TO_BE_REPLACED

A host of other celebrity puppets have already been revealed from the show, including Boris Johnsin, Donald Trump, Mark Zuckerberg and Vladimir Putin.

Here is the trailer for the new Spitting Image  - NSFW warning though, it does feature puppet genitalia.

The trailer focuses heavily on the double team of Trump and Johnson. In the standout scene, they are hanging out in a sauna. Then Vladimir Putin arrives, who is portrayed as about 3 ft high, and challenges them to a fight. They then all strip naked, for some reason.

Elsewhere in the trailer, we see several public figures being bribed to promote Spitting Image, including Dwayne 'The Rock' Johnson and Kim Kardashian. Kanye West is seen throwing shoes at the UN after declaring himself rule of Earth, and Mark Zuckerberg stealing people's phones on a moped.

The new series will air on BritBox from October 3.